“Guybrush Threepwood has returned!” I wailed a few months back, barely able to contain my enthusiasm. “The Monkey Island series was rebooted about two years ago you uninformed moron! He’s been back for ages.” I may have heard you accurately (if not tactfully) shout back. Alas you would have been correct in your garrulous assertion, but this time he was a real, living, breathing person. That’s right, every gamers favourite pirate arrived from the computer gaming heavens last August and graced a stage at the Edinburgh Fringe Festival not so near to me (being from Birmingham and all), manifest in physical form. The uninitiated may feel a little lost so far but stick with me, I’ll be back on films soon enough I can assure you.

Well, this at first did indeed seem like a rather pleasing turn of events. As I perused the advert for The Secret of Monkey Island on the Fringe’s website I glanced across the blurb:

“Join Guybrush as he buckles, swashes, shivers timbers, discovers Grog and competes for the affections of the beautiful governess Elaine Marley against the heinous and not-quite-dead Ghost-Pirate LeChuck. Rated Arrrrrr!”

As a young man over the age of Arrrrrr! who has spent many an afternoon adventure gaming like the 90’s had never ended, going to see this show was surely a no-brainer. A swashbuckling time would most definitely be had by all I convinced myself as my mouse hovered over the ‘book tickets’ button, but something stopped me. It may haver been the realisation that I wasn’t actually going to the festival itself and live (as Google Maps assures me) 306 miles from Edinburgh, but no, it’s a niggle at the back of my brain that reminds me that all game adaptations, whether to paper, screen or stage, are uniformly terrible. “Arrrrrr! Why is this?!” I lamented, throwing my pirate hat, eye patch and suitcase to the floor and my hands into the air.

Ok, I’ll take this chance to regain some semblance of credibility and just point out (if you were in any doubt) that I never really was this excited; the games aren’t even that amazing. But the question remains; why is it that video games are just so lousy when it comes to artistic reappropriation?

It’s not like they haven’t tried to adapt Monkey Island before. Way back in 2000 Lucasfilm began work on an animated feature based on the series, with a Mr Ted Elliott writing the story and screenplay. The film was cancelled however and low and behold three years later a little known feature called Pirates of the Caribbean comes out, written by some guy called Ted Elliott. I needn’t outline the overt connection here but what I think it teaches us is something altogether less obvious. The first Pirates film was (despite what the sequels may have done to sully it) a good film and that it was based on a theme park ride (and maybe a partly a game) didn’t seem to matter. If a theme park ride can be adapted into an multi-million dollar, Oscar nominated film, why can’t a game?

What the Curse of the Black Pearl taught us is that if you are going to use a more unconventional (and dare I say it, conventionally flimsy) basis upon which to base a film, then you have to work only with the basics and flesh out the rest yourself. This in Pirates of the Caribbean‘s case meant taking an eccentric character, a name and pretty much a premise (much like that of Monkey Island) and fleshing out the rest in the screenwriting process.

The interactive nature of games and their prolonged periods of narrativeless action do not lend themselves to the big screen. The setting, characters and plot details therefore seem to be the limits of the amount a game (however narrative driven it may be) can contribute to an exclusively narrative driven medium. But why even when this is done are most game inspired films such utter trash? Well like anything, this process of bare bones adaptation can be done in the right way or the wrong way.

A live action film in which a man repeatedly tramples on colourful tortoises wouldn’t really grab the public’s imagination and may actually alienate the children that would comprise its target audience. Substitute this for a lot of rubbish about reverse evolution and dinosaurs and some other stuff I really failed to pay attention to or care about and what you have is the artistic squalor of 1993’s film adaptation of Super Mario. It might just be me, but I would take watching Tortoise guts splatter my screen surrounded by the screams of distressed children and the disgust of their parents alike over Bob Hoskins in an animatronic dinosaur head any day. At one time I thought that I would enjoy watching good old Bob in anything, apparently not.

Apart from this attempt which due to its failure ended up being a one off, there has since been a slew of terrible game to film adaptations which have worsened the stock of the genre considerably and driven away the creative talent that it so badly needs. For anyone in the know I’m sure there is one eminently punchable man on your mind at this moment in time (pictured above – do try to resist punching your screen). The venerable Uwe Boll has not only dedicated his career to adapting some of our most beloved (and some less so) video game creations into fetid piles of steaming celluloid cack (Far Cry, Alone in the Dark and House of the Dead to name but three), but he has done it with all the grace and tact of a man consumed with contempt for his audience. He tirelessly spews out this trash with the unanimous criticism of his critics ringing in his ears (he held a boxing match and invited them to come and fight him) and in the face of a petition for him to retire (currently with 366032 signatures – including mine), but he will not be stopped. Thankfully he recently took a break from game to film conversions, writing, producing and directing the ominously titled Auschwitz, in what anyone with a sense of cultural judgment would term as a wildly insensitive move at the best of times. If you can stomach the abhorrent tactlessness I urge you to track down the trailer on YouTube to understand what an idiot Mr Boll really is.

However, as I have stated before, although the history of games based movies is littered with failures that have stunted the emergence of the genre, there is definitely the potential out there to make a great film. As many have done before me I like to think of Bioshock as the yard stick. It’s a rich vein of material just ready to be plundered for the big screen. It’s Ayn rand inspired plot, great writing and characters, uniquely amazing setting and dark, horrifying atmosphere make it a perfect candidate to bridge that most wide of gaps between the desktop monitor and the cinema screen.

In pre-production for a period of two years whilst Gore Verbinski (it’s ok he’s only producing) tried to cobble together the huge budget needed to recreate Rapture’s undersea metropolis and Juan Carlos Fresnadillo on board to direct it looked promising. The studio however wanted their budget to be spent on a more restrained mainstream effort than the dark and violent story that the game demands and thankfully rather than acquiescing to this limited vision of the source material the project collapsed and is now indefinitely on hold. If Bioshock is currently our greatest hope for a great game based film then I would rather not see the opportunity squandered on sub-standard fare. I’ve got to say though, a film depicting the downfall of the city of Rapture does have me rather excited, whether or not it’s a success.

Laying it on a bit too ‘Thick Of It’ 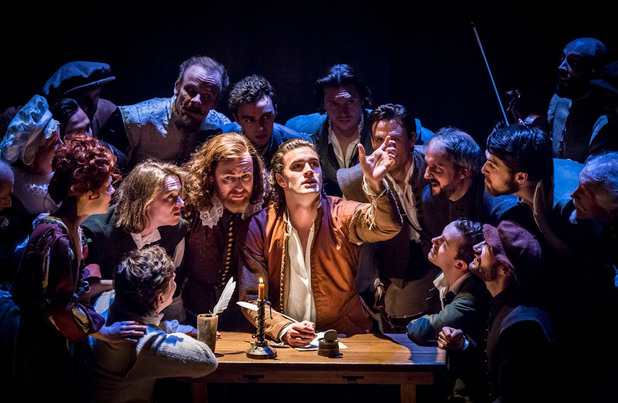 Falling for The Bard: Shakespeare in Love finds its home in West End