The evening began with an emergency debate designed to get the chamber in the mood for discussions of sexism. The motion this House would allow everyone to vote for VP Women in OUSU elections carried, with very few speakers for the opposition. This was not to be a foretelling of the evening’s main event, with the opposition edging a victory by only nine votes.

Toby Fuller, a member of the Secretary’s Committee, opened the debate. He stressed that the assumption of meritocracy is false, because individuals do not begin from a place of equality: “To walk out of the noes door this evening is to ignore the  inequality endemic in our society, to say that there is no discrimination would be to recognise one part of society to be innately superior to another.”

As a result, positive discrimination becomes a necessity to ensure that people have an equal chance to succeed. Fuller was critical of the assumption of substantive equality arising from legal equality: “In practice it is impossible to say that we will live in a fair society purely because our laws espouse equality. No one in life starts in the same position and no one has the same opportunities in life.”

In response, Martine Wauben, newly appointed Returning Officer, challenged the claim that women (or other minorities) needed a leg-up. In fact, she claimed, such an analysis is “frankly patronising – I don’t need some man’s quotas and policies to get me a job I have earned.” She noted that “most employers aren’t sexist or racist: they are acting on a sensible basis with a bad outcome. We should make it equally sensible to employ everyone, not artificially make the statistics look good.”

Wauben then made a sophisticated argument about the way in which these policies only affect the most privileged members of minority groups: “Most of these policies don’t reach the ones you’re trying to reach: only the vocal ones who are aware of the legal requirements.” These groups (like white middle-class women), she argued, are exactly those that do not require the legislation in the first place.

Martin Castro, a Democratic Party politician, countered Martine with his personal experience of discrimination in the United States. He explained that he had suffered institutional racism, and that this comes about as a result of inbuilt societal consciousness. He echoed Martine’s intersectional concern, when stating that 14.3% of minority women are unemployed – legal equality, he argued, is just not working. In short, then, affirmative action is a necessary good, at least in the US, given the power of subtle racism to keep minority groups down.

Carla Buzasi, editor-in-chief of Huffington Post UK, speaking for the proposition, introduced an analysis of power into the debate. She stated that those in positions of power are not representative of wider society, and thus that women do not receive equal treatment – women are under-represented in the media and in the FTSE 100 – and consistently have to face death and rape threats if they attain positions of power. She also spoke of her own experience as a prominent female journalist. She said that she is constantly treated to sexist abuse; and that she is often patronised, included by the Leveson Panel who ‘congratulated’ her for her success. These analyses lend support, she argued, to the need for affirmative action.

The third opposition speaker was Heather Macgregor, better known as the FT columnist Mrs Moneypenny. She argued that positive discrimination was not necessary, and certainly did not get her where she is today:

“A vote for positive discrimination is a vote for more legislation, not what women need.” Rather than passing formal legislation to encourage positive discrimination, Macgregor argued that other forms of pressure would be more effective. In particular, she pointed to the example of Norway, who have some of the worst rates in Europe and formal legislation. More role models and successful women in society will ensure that women will not need the law to support them.

Ada Meloy, Deputy General Counsel of New York University, made a persuasive case that the negative connotations of the term ‘discrimination’ are not inherent to the term. It simply means making a discrimination of difference – something that we do all the time when looking at people. She gave a subtle analysis of the way in which discrimination is seen to occur in selection processes – this discrimination is not obvious, and may not even be conscious. Her argument, then, was that affirmative action is needed to prevent the disadvantaged from losing ground even further; this will, in turn, allow for the creation of a successful society.

Erik Erickson, editor in chief of the highly conservative US online blog RedState.com, stated the (fairly well-established) point that discrimination is being used to fight discrimination. This, he claimed, is an “evil fighting evil”. 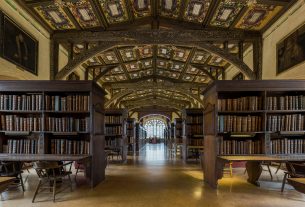 All Bodleian Libraries to close today

Burma: ethnic issues must not be sidelined