So picture the scene: you’re walking along a busy city street in the morning, commuters and shoppers bustling everywhere as you pass all the large and enticing windows of flagship stores. In amongst the glossy tanned bodies on billboards and the shop mannequins which are so small the clothes have to be bulldog-clipped at the back, you spy something unfamiliar: a group of three mannequins modelling sheer underwear. Not such an unusual sight, except for the fact that all three have a significant amount of pubic hair on show.

What is your reaction? Shock? Delight? Disgust? All of these, it seems, were expressed when American Apparel exhibited this very window display, with the proclaimed motive of opening up discussions about female beauty. Even disregarding those who found the concept revolting, the reaction to this stunt was mixed, especially amongst feminist commentators. Though many were pleased to see a confrontation of beauty standards in a mainstream context, others argued that if American Apparel were going to fully engage with this debate it would take more than an unkempt bikini line. Why, for example, were all the models white? And why did they all have a typically ‘desirable’ slim figure? It was felt, in some cases, that the retailer was merely jumping on a bandwagon of resurging feminism in an attempt to appear ‘cool’ and sell more underwear. The fact that American Apparel, of all shops, should choose to do this, also raised a few eyebrows. With a CEO who has been accused of sexual harassment, and a hiring policy which is allegedly based on prospective applicants’ attractiveness, could this supposedly feminist statement be merely a bid to cleanse their image?

This kind of clash between fashion and feminism is always going to make some people uneasy. At a recent Isis event, Joy Lo Dico, a journalist on the Evening Standard, presented the rest of the panel with a conundrum: if Vogue were to do a feminism issue, would that mean feminism has won? While it was conceded that bringing feminism to the masses could have its benefits, the general response was concern; if feminism becomes a cover story on a fashion magazine, it would be seen as a trend, and as with any other trend – like chiffon or cupcakes – would become passé a few months later. If feminism is turned into a passing fad, this undermines its importance, and could result in the ideology being dismissed as something people are only invested in because it’s “trendy”. So can the fashion industry interact with feminist issues at all? It’s a tricky question, perhaps mainly because, though many areas of the industry appear to be female-dominated, it is largely owned by men, most of them more concerned with making a profit than making a political statement. Furthermore, it is a concern for many feminists that mainstream fashion commodifies and fetishizes women’s bodies in order to sell a product. Then there are all of the well-trodden issues surrounding body image which are often blamed on the fashion world. All of these present a conflict of interest for the feminist who is also interested in fashion. Even when brands like American Apparel question what the industry perpetuates as “beauty”, it is important to remember that they are still capitalist structures, whose very existence depends on selling you products. This makes it very difficult to distinguish between an advertising ploy and a genuine campaign.

However, it is impossible to deny that the fashion industry can be an important agent of change. Some trends fade in and out faster than you can catch them, but others become a generally accepted part of culture. Consider how what we wear has changed over the past century and the impact it has had. For many, the loose dresses of the 20s, masculine shoulders of the 40s and miniskirts of the 60s have all formed important parts of women’s liberation, and for these to be popularised they all had to work their way into mainstream fashion. Who’s to say that the work of today’s fashion world is any less important? 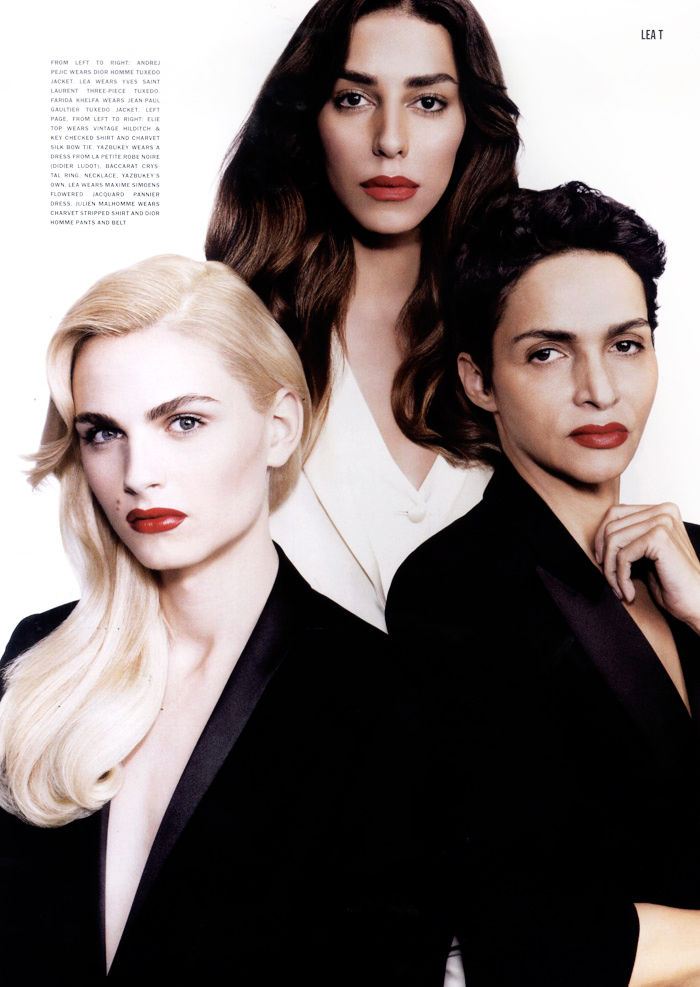 Because when you begin to look around, American Apparel is not the only brand challenging gender norms and constraints. Transsexual and transgender models are now more accepted, with big names like Andrej Pejic and Lea T leading very successful careers. Several designers, including Miuccia Prada, Rick Owens, and jeweller Eddie Borgo, draw their inspiration from the image of empowered women for their latest collections. Elle Magazine is running an equal-pay campaign as part of its feminism project. There are even more women in the very top jobs, such as Stacey Cartwright who is now Chief executive of Harvey Nichols. There is undoubtedly a mood around fashion right now which is questioning traditional gender roles, and the fact that these statements are visible in the mainstream is surely a good thing. The huge audience which they can garner is bound to help stimulate discussion and change.

So how can we, as average fashion consumers, think about all this? Should we be worried about appearing complicit with an industry which profits from creating unattainable ideals? It’s certainly a good idea to remain aware of the commercial nature of fashion, and how this can affect PR choices, being particularly alert to when brands might merely be using feminism as a marketing opportunity. Yet we can still applaud big brands and magazines when they confront what we think of as ‘beautiful’, because without their support we are unlikely to see any real change. As well as this, it is worth noting that the big names which form the mainstream of fashion are not the only people involved in the industry. If you’re bored of the limited way in which Vogue defines beauty, read Ladybeard, Rookie, or XXY. If you’re worried about feeding into a male-owned company, find independent female designers through Etsy and ASOS Marketplace. Above all, remain conscious of the flaws in how retailers, publications and designers interacts with feminism, but don’t let this stop you from enjoying fashion.

From Harry Potter to A Single Man : Wardrobe inspiration