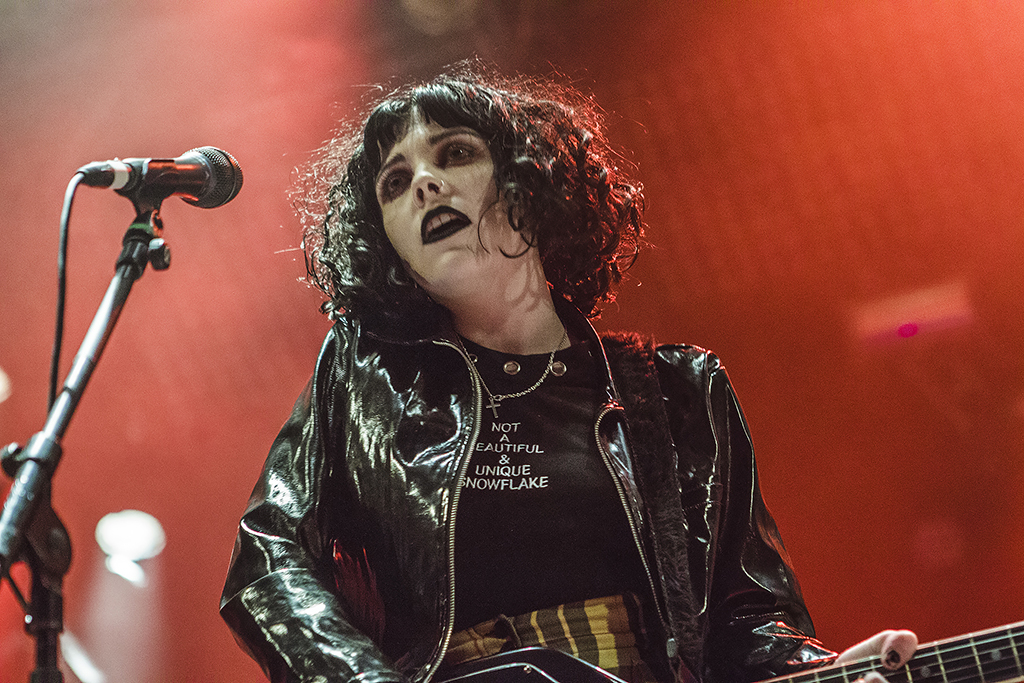 Oddly, the first thing that strikes most new listeners of Pale Waves is the juxtaposition between the band’s gothic aesthetic and their indie-pop synth sound, and it is a juxtaposition that pervades their music too. It is an intensity, echoed in their look, delivered in an upbeat way that gives Pale Waves their distinctive sound and adds a bittersweet poignancy to songs that could be celebratory.

Their song ‘New Year’s Eve’ has an infectious beat and layered riffs that would not be out of place at a party, but the lyric ‘I don’t want to be alone on new year’s eve’ pervades and adds an authentic tinge of heartache to an otherwise conventional pop song. Their lead singer, Heather Baron-Gracie, summed up this effect in an interview to the NME saying ‘I want to make people dance at our shows and not kinda just cry: they can cry and dance.’ It is also in this respect that a very clear musical influence from ‘The Cure’ comes into play, yet even just in the aesthetic they are clearly taking cues from Robert Smith.

The moment on the EP where the balance between dancing and crying tips toward the latter is in ‘My Obsession’, inspired by Heather’s experience of her Granddad grieving his wife. The vocals here sound more vulnerable and pained, particularly in the stripped back first verse where the lyric ‘when death comes you should be heaven’s obsession’ rings emotively. The music video to this, where Heather has a relationship with a mannequin, echoes this kind of surreal sense of estrangement that only becomes more pointed with the contrast to its playful upbeat elements.

When listening through this EP the similarities to The 1975, also signed to their label ‘Dirty Hits’, cannot be ignored. These similarities are made even more evident due to Matty Healy’s heavy involvement with the development of the band, from directing their music video for ‘There’s A Honey’ to supporting their US tour. But despite the indie-pop sounds reflecting each other to an extent, there seems to be a greater energy to Pale Waves. They have a lyrical rawness and, unlike many moments in The 1975’s music, they have not succumbed entirely to the ‘pop’ element of their ‘indie-pop’ sound.

This EP is the culmination of much of Pale Waves’ earliest work, and it is nice to have a cohesive entity that pinpoints their sound at this moment and also stays true to their fan base. But with hints that their debut album is going to be slightly darker, and Heather even saying in an interview that ‘I think we’re just going to show another side to us which is a lot more emotional’, I see the EP as only the first manifestation of the kind of sound they will create. I am excited to see how the connection between pained emotion and pop will continue to be experimented with. I think that in pushing the emotion further they will be able to create some interesting sounds that will really establish their unique voice and help solidify their position in the indie-pop genre, moving them further away from comparisons with giants of the genre like The 1975. Pale Waves are also currently embarking on their first headline tour and how their sound changes with confidence and experience will also be very intriguing to track.

Overall, this EP is a clear expression of the captivating Pale Waves sound as it currently stands, but it is clearly only the beginning of something that I will be eager to see develop.

The Pale Waves are playing in Oxford at the Bullingdon on Monday 26th Feb.