No-one is postulating an Independence Day scenario anytime soon (fortunately!) but the existence of extra-terrestrial life is far from science fiction.

Evidence has been emerging in the last few decades suggesting just how likely life elsewhere in the universe is. The existence of bacteria that can live in space or even in nuclear reactors suggests that life may not need the conditions which we generally consider habitable.

The discovery of more than 450 planets orbiting suns other than our own suggests a high probability of earth-like planets existing. As it is, the universe is just too big for there to be no life on any of the billions of planets that must exist.

Of course, this life might just be in the form of microorganisms. (That would be a disappointment!) It would certainly be very different to what we understand to be life: we could probably find weirder things than H.P. Lovecraft’s Mi-Go (super intelligent, space faring fungi) if we searched enough of the universe!

It seems clear that, when speculating about what extraterrestrial life might be like, nothing is certain. All our assumptions are based on life on earth — we can have no way of knowing if they are representative of life elsewhere.

This has important implications for whether we should try to contact aliens, were we to learn of their existence. If we know little about what intelligent aliens could look like, imagine how little we know of what they could think?

Would our systems of language, of thinking, even, be so different from ours that we would be unable to communicate with them? Would they even communicate using the concept of words? (We might have a difficult job understanding how they express “Die! Earthling scum!”)

Part of me suggests that trying to contact aliens is a good idea for the sheer intellectual curiosity. But there could be more to it than wanting to see how life and intelligence manifests itself on other planets, with all its bizarre and wonderful potential.

A civilisation with the spacefaring ability to visit us would have to be far more intelligent than us. Just imagine what we could learn from them.

If the human population keeps expanding we’re going to run out of room and resources on earth. We might just need the help of a species with advanced space travel.
We need not necessarily fear aliens; their overwhelmingly hostile portrayal in popular culture was probably born in our own xenophobic fears: its continuance mere cliché.

Keeping an open mind about potential alien species might just be better for the human race than quavering like conspiracy theorists in our tin-foil hats, terrified that any potential extraterrestrials are going to blow us to smithereens. 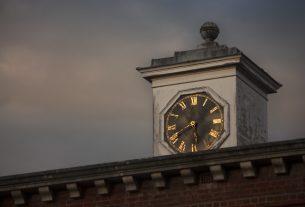 LMH students reprimanded for walking around in underwear