Rachel Johnson is an intimidating woman to interview.

Most commonly known as the sister of Boris, this pales in comparison to her own flourishing career. Oxford alumna of New College, and first female graduate trainee at the Financial Times, she has written for the Daily Telegraph, the Evening Standard, Easy Living magazine and The Sunday Times, amongst others, whilst also writing three bestselling books and appearing on Newsnight during the election campaign.

Her current role is editor of The Lady, a magazine established in 1885 which Rachel is currently seeking to modernise, interviewing high-profile characters as Liz Hurley and Tracey Emin.

A recent Cutting Edge Channel 4 documentary focused upon Rachel’s new role as editor was the basis for my pre-disposed view of her. Concentrating on a power struggle within the office of the magazine, Rachel appeared ruthless and willing to sack anyone who didn’t follow her agenda. However, expecting to be confronted with this character was my first mistake.

The documentary wasn’t accurate, causing it to appear that she had sacked people in meetings when this didn’t take place. Furthermore, any ruthless characteristics portrayed were due to the fact that “there was quite a lot of stuff to deal with when I arrived, to put it mildly.” In fact, Rachel admits that she came across as tough because “I was actually quite unconfident about how I was supposed to act.”

So how did Rachel Johnson go from editor of Isis magazine in Oxford to journalist in leading national publications? Well firstly, it seems like there wasn’t another career option: she gravitated towards journalism as “it just seemed to me the only thing I could do, I might have a chance of earning some money.”

This decision couldn’t have been more suited to her – “I’ve never regretted it, I can’t imagine having more fun doing anything else.” And the “quick sprint” of journalism has led to the “slower burn and bigger satisfaction” of writing novels which have been published internationally.

But the journey hasn’t been easy. Lonely and homesick, she left the graduate training course with the FT without receiving her diploma because “I’m naturally resistant to authority.” She considers the FT to be very kind to her because she was not “able to understand it all very well” and a “bit idiotic,” writing about bond markets whilst being “completely innumerate.”

This is my second mistake. Expecting to be confronted by a career-driven woman, Rachel is modest about her achievements and considers herself to be a “total opportunist,” rather than calculating her next career move. Saying “God knows where I’m going to end up,” it is clear that she views her editorship at The Lady as just another “irresistible” opportunity that has come up, another “once in a lifetime” occasion.

Yet I suspect this modesty of hiding a fierce intelligence – after all, frequent once in a lifetime moments don’t appear to those who aren’t able to handle them.

And editor of The Lady is a difficult opportunity to handle. Set the task of re-making the publication and with the publisher wanting “a different product,” Rachel has to tread the “very fine line” of changing “virtually everything” about the magazine whilst also keeping the old readership satisfied. And with interviewees such as Tracey Emin telling the magazine that “drawing is just like sex – myopic, drawing on the imagination to focus on a fixed point,” this task seems nearly impossible.

No Apologies: Leaning in & Speaking Out 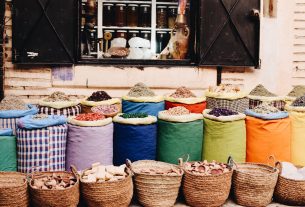 Why you should go to Morocco for your next holiday