After four days of intense bumping, there were some surprising winners, and losers, by the time the boat houses were locked on Saturday evening after this year’s Summer VIII’s.

In the men’s first division, Christ Church maintained their Head of the River status throughout the whole weekend, silencing a restless field which saw much jostling for positions elsewhere.

Wolfson, St Catherine’s, Hertford and University colleges all saw their men’s first crew clamber up the first division, with Wolfson proving particularly impressive as they bumped every day after starting on Wednesday at the back of the field.

Less impressive were the performances of the Balliol, Magdalen, St Edmund Hall and Exeter men’s first crews who all saw their position on the field slump despite some valiant efforts.

Exeter and Magdalen will both feel particularly embarrassed after seeing their crews drop out of the first division and being bumped every day respectively.

Elsewhere in the men’s division, Christ Church II showed the depth of ability and ambition expected of such a reputation by breaking out of the third division and making it to tenth in the second, the only second crew in the division.

This year, the dubious honour of lowest ranking men’s first crew was awarded to Green Templeton College, who finished tenth in division VI.

After a disappointing series of results in the men’s division, it was Balliol who triumphed in the women’s first division, deposing last year’s champions St Edmund Hall, who will rue the single bump that led to them finishing second behind the Lions.

Pembroke and University colleges were the other major successes in a more stable division, with the former moving from eighth to fourth after bumping each day and the latter rising to tenth in the first division from third in the second in a remarkable display of bumping ability.

Elsewhere, Worcester jumped from second in the third division to seventh in the second while Regent’s Park endured a bizarre weekend as they climbed from bottom of division IV only to plummet on the final day into division V.

Christ Church will undoubtedly be the most pleased of the competitors after claiming head of the river in the men’s competition and seeing a promising rise in position amongst its other crews, which is an intimidating portent for other colleges next year.

St Edmund Hall will not see this as a year to remember, as an encouraging improvement in the men’s division was offset by losing the title to Balliol in the women’s. 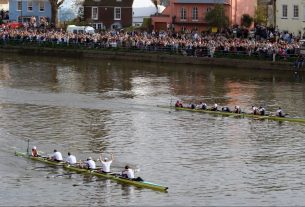 David Lloyd is wrong – Murray is an inspirational force