“That is my actual name,” explains support act Brigitte Aphrodite. “I was baptised in Greece. I’m not just a pretentious twat.” And then, glitter spiralling from her hair, she glides through three minutes of exuberance and wit, largely about ice cream.

“Shut up you annoying bitch,” shouts a man in the crowd, in an acute impersonation of a misogynist turnip reviewing a female stand-up.

Later that night a constellation of camera phones shine in the mid-distance. Behind them Kate Nash, one of the most prominent female faces of British pop music, is sitting behind a keyboard. It is covered in bubbles and light bulbs and looks like the spawn of a giant hipster frog. She is talking about the commodification of the female form.

There follows an accomplished and varied set full of aggression, wry humour and gender politics. Like the Riot Grrrl movement that inspired her last album, Nash rips up and remoulds the masculine dominated forms of her contemporary culture.

At some time that evening, somewhere at the back of the room, the man who heckled Brigitte Aphrodite is probably leaving in search of a Daily Mail. Because he just saw a small but passionate example of modern feminism, sitting behind a keyboard, decorated with bubbles, filmed on a mobile phone.

Podcast: Not Quite Harmony

Lola King gets off to bad (kick)start 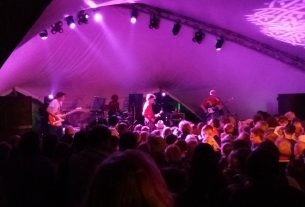