The Pro-Life Society were allowed to display some of their literature and posters at a stall, but were required to leave out images of healthy foetuses and references to “eugenic abortion”.

The OUSU Vice President for Women, Katharine Terrell, told the society president the day before the Fair began that her society would be able to use only one of five pieces of literature in its original form.

Terrell had requested several days earlier to see the material the Pro-Life Society intended to display; it was the only society asked to provide its material for review ahead of time, OUSU officers confirmed. Terrell said had to consult with other officers and returned a decision to the Pro-Life Society as fast as possible.

Pro-Life Society President Charlotte Kynaston said: “Particularly galling was the fact that we were the only society censored in this way, which suggests that OUSU officers made the decision based on their own personal views.”

Kynaston described the action as a display of “too much arbitrary power”.

Terrell, the women’s officer, said the Pro-Life Society was singled out for prior review because of complaints made at a previous Freshers’ Fair “that stallholders were using aggressive tactics”, though added that she understood the current society’s leadership was not responsible for past actions.

Terrell said OUSU’s first priority is the welfare of students and that women who come to the Freshers’ Fair may have had abortions or miscarriages and could find the images of foetuses “distressing”.

An anti-war display at Freshers’ Fair included photography from war zones; asked if this might also have had the potential to upset viewers, Terrell said she had not had any complaints about that material.

“If people find other material distressing they should tell OUSU. OUSU can’t be the eyes and ears of the whole fair.”

Kynaston, the Pro-Life Society President, disputed the idea that the foetal images might be distressing, pointing out that reports in national newspapers and on the BBC have been illustrated with similar graphics.

According to the OUSU website, OUSU is affiliated with Abortion Rights UK, “the only abortion-focused campaigning and advocacy organisation in the UK”. Terrell said that this affiliation expired in August but at the time of going to press the OUSU had not updated their website.

This affiliation “strongly suggests that OUSU is against the pro-life movement”, according to Kynaston, who claimed that Freshers’ Fair guidelines “seem to be at the whim of OUSU officers”.

OUSU have a policy against organisations that give directive advice. Terrell said: “In this case the society was directed towards women who are pregnant.”

Darinka Aleksic, Campaign Co-ordinator of Abortion Rights UK, said: “Students at the Freshers’ Fair may have faced unplanned pregnancies. If organisations show particularly graphic images and information not backed up by an organisation much as the British Medical Association, it’s not the most appropriate thing to be showing.”

Kynaston that it was unfair of OUSU “to continue censorship indefinitely” based on actions at past Fairs, that OUSU’s guidelines are unclear and that they change every year.

OUSU relaxed rules this year previously used against Pro-Life, allowing them to use the term “unborn baby” despite forbidding this in past Freshers’ Fairs.

The Society for the Protection of Unborn Children provided one of the leaflets censored by OUSU. The General Secretary of SPUC, Paul Tully, said that while it was up to OUSU what rules they impose on an event they organise, “the idea of affiliating to a pro-choice movement is obnoxious” and “contradicts human rights documents such as the Universal Declaration of Human Rights.”

OUSU President David Barclay said: “It’s Freshers’ Fair, and it ought to have a welcoming and inviting atmosphere for all students.” 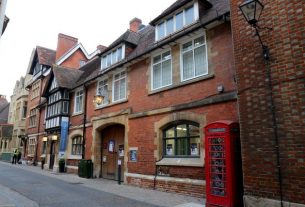