Eight Vodafone stores across the UK, including one in the centre of Oxford, were picketed by protestors last week.

The Vodafone store on Cornmarket Street was taken over on Saturday from 2pm to 3.15pm by students and members of the public outraged by the company’s alleged tax dodge of £6 billion.

The protestors entered the store just before 2pm; on the hour, a signal was given for everyone to sit down. Around 30 people sat on the floor of Vodafone in what was intended to be a peaceful protest.

One of the protestors, Amy Walker explained why she was there: “I’m disgusted that Vodafone, and other multinational companies, are being let off billions in tax owed to the British public through legal loopholes and back room deals, whilst the services that we rely on are being so savagely cut.

“It shows our government’s priorities lie in pleasing big business at the expense of the tax payer.”

Members of the public were prevented from entering the store for the duration of the protest, as the doors were closed by security.

After an hour, the Vodafone store manager read a statement to the effect that protesters were now deemed to be trespassing.

The majority of the protesters then left. While some remained, one male student was arrested and led out of the store in handcuffs.

The student said the police entered the store and told protestors to leave. “Within a minute, while we were discussing what to do, I was arrested. I confused as to why I was chosen.”

The handcuffs were removed by police around the corner on Market Street and he was de-arrested five minutes later as the crowd outside chanted “Let him go”.

When asked if he thought the day was a success, he said: “It’s about raising awareness and I think we did that. Vodafone are saying that legally they haven’t done anything wrong. There is a difference between tax evasion and tax avoidance, but right now, when everyone is feeling the pinch, it’s unfair that they should get away with this- it’s unethical.”

The outside protest on Cornmarket Street, saw students and members of the public handing out flyers, with large banners reading: ‘Vodafone’s Tax Dodge: £6bn – Welfare Cut: £7bn’, and placards with the Vodafone logo above the words ‘Tax Dodgers’

Protestor Amy Walker said: “After claims from the Chancellor that his huge public spending cuts are “fair”, and that “we’re in this together”, we are here to put forward an alternative: start with claiming the £12 billion a year owed to the public by some of the world’s richest companies before raiding the services relied upon by the most vulnerable in society.

“With hundreds participating in similar actions across the country, we are making a stand against the government’s self serving and unjust agenda. Vodafone ducked out of billions in tax, and the government helped them do it!”

While the campaigners have set up an online petition calling on the government to insist Vodafone pay the money, a spokesperson for Vodafone has denied the reports calling £6 billion sum “an urban myth”. 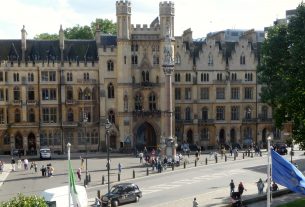 Eight top schools get as many Oxbridge places as the next 2894 UK state schools combined, according to Sutton Trust report