On Sunday 7th November members of Christ Church JCR voted in favour of a motion supporting the government’s proposals for increased tuition fees and a graduate tax, rejecting OUSU’s anti-fee- increase stance. However, the motion also condemned the planned 79% cuts to government funding of universities. Negative national press coverage this week has provoked an angry reaction from some JCR members.

The meeting was held just days before more than 400 Oxford students travelled to London to protest against the trebling in fees up to £9,000 supported by the government.

The motion was proposed by JCR OUSU representative Sebastian Fivaz who was concerned that students at Christ Church had not had a chance to share their views on the changes to fees: “OUSU consulted a select group of people to come up with their stance rather than doing things from the bottom up.” “We need a position because OUSU assumes ours currently,” he said at the meeting.

The committee had also considered holding a referendum on the matter but felt that this did not offer sufficient opportunities for debate and amendments to the motion.

OUSU President David Barclay was unperturbed by the support for fee increases: “I actually welcome the fact that common rooms are taking a stance on Browne and the cuts to higher education funding; it’s always great to see students engaging in an issue that affects us all.” He emphasised that the motion rejecting Browne’s proposals had received unanimous support in OUSU Council.

This motion, which preceded the government’s funding plan announcement, resolved to oppose the overall package of the Review, although accepted some positive aspects of it such as the increase in the repayment threshold. OUSU has opposed a graduate contributions tax and lifting the current cap on fees since Trinity 2009. “If students want to make their voice heard on this or any other issue they should come to OUSU council or mandate their common room representatives to speak on their behalf,” Barclay said.

Other members of the University were accepting of the Christ Church motion despite its potentially divisive nature. Lucie Coussmaker, a student at Worcester who attended the protest in London, said “although I obviously disagree with them, the members of their (Christ Church) JCR have the right to say what they think as much as I do.”

Students present at the emergency meeting said the motion was discussed “very rationally”. An amendment to oppose fee increases was rejected. Twenty-one students voted in favour of the original motion supporting the government’s proposal, 14 in opposition and four abstained.

Coverage in the national and regional press has emphasised the College’s support for higher tuition fees, referring to the College as “elite”. Members of the JCR committee have agreed not to speak to the press due to this “misrepresentation” in order to “kill the story”. “We don’t want people to think that the motion was put through by 21 members of the Bullingdon Club,” one JCR member said.

Members of the College, including those who supported the motion, are worried about the effect that the coverage could have on Christ Church’s access work: “This is very disappointing for our admissions officer who spends her life trying to encourage people to apply to Oxford,” a committee member said. The reaction has been angry from some students and at higher levels of the college, including from the Dean.

One student in favour of the motion disagreed with press coverage which suggested it just supported higher fees: “The main part is to oppose the cuts strongly…and emphasise the other beneficial aspects of the Review.” The progressive graduate tax proposed by the Browne Review in particular had support: “Higher fees will help the poorest as the interest rate is lower, and it will end up hurting higher-earning graduates more.” Emphasis was placed on the greater number of bursaries suggested in the Review to balance out higher fees. However, students were opposed to the unlimited fees outlined in the Review and were in favour of the £9,000 cap proposed by the government. 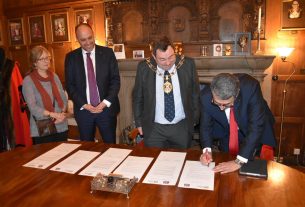