The award recognises the exceptional achievements of a female researcher in molecular biology over the previous five years.

Robinson has been honoured by the Federation of European Biochemical Societies (FEBS) and the European Molecular Biology Organisation (EMBO) for her work in the development of mass spectrometry to be used to investigate the structure and dynamics of protein complexes.

Her collaborator Wolfgang Baumeister, from the Max Plank Institute of Biochemistry in Martinsried, Germany, in his nomination of Professor Robinson for the award, said: “Carol V. Robinson has pioneered, in an almost single-handed manner, the use of electrospray mass spectrometry for structural studies of large multimeric protein assemblies. She had the courage to do what experts regarded as not feasible and has succeeded in the face of strong skepticism.”
The award also recognises Professor Robinson’s mentoring of women pursuing careers in science. Winners of the award are role models who inspire future generations of women with careers in science.

Professor Robinson said: “I was delighted to receive this award – I heard the news via email in an internet cafe in New Zealand where I have been lecturing. I was very surprised as I didn’t know I had been nominated for this award.  It is a great honour for me and my group to have our research honoured in this way.”

Her research has furthered the development of mass spectrometry. This is an analytical technique which is used to measure the molecular mass of a sample. It can also generate structural information of molecules by fragmenting the sample and analysing the products.
Her team was one of the first to use electrospray mass spectrometry to study large protein masses. This is a technique to produce ions and is useful for large molecules because it prevents their tendency to fragment during ionisation.

In collaboration with Micromass UK, a company manufacturing spectrometry products, she designed an instrument specifically adapted for the detection of high-mass complexes, which has now been installed in many laboratories around the world.

Before winning the award, Professor Robinson became the first female professor of chemistry at Cambridge University in 2001. Three years later, she was made a Fellow of the Royal Society and was awarded the Royal Society’s Rosalind Franklin Award, which promotes women in science, technology, engineering and mathematics.

The Women in Science Award of 10,000 Euros will be presented to Professor Robinson on 28 June at the 36th FEBS Congress in Torino, Italy, where she will present a special lecture.

The not so glorious revolution 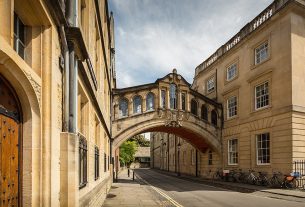