Chris Ward analyses the reaction to the latest developments in Libya.

This will be the third impartiality article this term that will look at the media’s response to protests in the Middle East. This week attention is fixed on Libya where tensions between the people and Gaddafi’s four-decade-old regime are becoming increasingly violent. The predictions made by the media, recorded in first week’s issue, that the Tunisian uprising would spark protest across the region have evidently become very real. The response of the BBC, not usually the subject of this column, has been to provide an interactive map of the spreading unrest showing that the spreading violence across the Middle East is probably the story that will define 2011.

The fact that unrest is ongoing and that Gaddafi is still very much in power has not stopped the media looking beyond the current regime and show that they expect him to go. The Guardian explains that “Like Mubarak, the Libyan leader has no designated successor” making a clear comparison with the ousted Egyptian leader but does also emphasise that “all key policy areas – defence, foreign affairs, and security – are firmly in Gaddafi’s hands.”

The Independent suggests that Gaddafi is very weak in the Benghazi region where many of the killings of protestors have taken place and also that the desert tribes, from which the dictator came, were turning against the leader. The paper reports that “The leader of the Al-Zuwayya tribe in the east threatened to cut oil exports unless authorities halted “oppression of protesters”. Indeed oil is a key issue behind this story as the Independent states “afoora oilfield was reported to have stopped production, according to Al Jazeera television. BP suspended operations for oil and gas drilling.”

The Telegraph’s coverage takes a rather different twist. As David Cameron arrived in Cairo it examines Britain’s relationship with Libya with an over-whelming negative stance reporting that “British weapons are believed to have been used to murder more than 300 Libyan pro-democracy demonstrators.” After which the report goes on to say “the UN High Commission on Human Rights, warned that Britain might be guilty of ‘complicity’ in the killings.” This as the article goes on to say these criticisms has been denied and rejected by British officials and the piece concludes like many others that civil war is not impossible. Though the fact that “As recently as January 28, the Government’s UK Trade and Investment body was trumpeting ‘business opportunities in Libya’.” means this is by no means the end of the story.

The story is still unravelling in Libya and the press is keeping well on top of it. It would seem that the media will soon be asking more direct questions over Britain’s role in Libya both in the past and future. 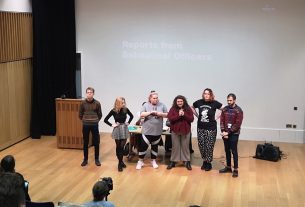