In one of his diaries, Chris Mullin wrote, “It is said that failed politicians make the best diarists. In which case I am in with a chance.” In person, Mullin retains the same self-deprecation and very humane warmth illustrated in his diaries. Bespectacled, slightly bookish and rather small, Mullin lacked the charisma today deemed necessary for the Cabinet, but that doesn’t mean he has a shortage of interesting things to say.

Very few men are better placed to talk about New Labour and their experiences in government than Mullin. This may sound ridiculous – what of Messrs Blair, Brown and Mandelson? But all three have to worry about their reputations. Mullin does not face the same issues – as he freely acknowledges, he was not a big enough figure. So we need not worry that his analysis will descend into tedious self-justification.

Whilst certainly not idealising their tenure in government, Mullin is surprisingly upbeat about its impact. As an MP, he represented Sunderland South, the seat whose fame rests on consistently being the first to declare during general elections. But it was also “one of the poorer areas of the country, an old industrial city which had been hit very hard during the Thatcher decade.” Mullin passionately believes Labour did much good there. Above all, he cites the example of Sandhill View School. “In the mid-1990s, less than 10% of pupils were five A-C grades; today the amount is in excess of 70%”, even though the school remains a comprehensive like before. He cites the “huge investment in health and education”, and the results these yielded – also including waiting times for hip operations in his constituency being reduced from “two years to 18 weeks” – as New Labour’s greatest achievement. He also rails against the notion that Labour did not do enough to help the poorest in society, arguing that through measures like tax credits and the minimum wage, “I can say with my hand on my heart that the least fortunate people in Sunderland were considerably better off by the end of New Labour era than they were at the beginning.”

On the other side of the balance sheet?  The “great shadow” of Iraq, inevitably, comes first. As well as all the carnage in the country itself, Mullin laments “the loss of moral authority, huge diversion of resources, our association with the worst American President of my lifetime, all those things were deeply damaging”.

Intriguingly, Mullin wonders whether Great Britain’s involvement would have been avoided had John Smith not suffered a heart attack. On 12 May 1994, Smith died, meaning Labour had to look for a new leader. This is a very significant date for Mullin, because it was the also the first day he began writing his political diaries. Whilst acknowledging that “you can never be sure”, Mullin “would like to think he would have gone with Europe rather than America”, thereby not entangling Britain in Iraq. However, he isn’t sure whether Smith would have been as successful in his dealings with Ireland, something he rightly emphasises as typifying Blair at his best.

Imaging what would have happened had Smith lived is, in a sense, a futile game. But it does help to shed life upon New Labour’s failings. Smith would have “signed up to the redistribution of wealth” on a greater scale than New Labour actually did. Innately a much more down-to-earth man, lacking Blair’s star quality, Smith “wouldn’t have been quite such a sucker for rich men as New Labour was”. Mullin says “we were far too dependent on the favours of rich men”, meaning Labour cultivated their support in a way they have not done historically. This brings to mind Peter Mandelson’s alleged words during coalition negotiations with the Lib Dems last year, “Haven’t the rich suffered enough?” And as Mullin diplomatically puts it “there wouldn’t have been the annual holiday problem”, referring to Blair’s penchant for jetting off here, there and everywhere. Fundamentally, Mullin considers “buying into the neo-liberal consensus” as Labour’s biggest failing during their 13 years in government. But for a critique from a leftwing perspective, why his in many ways is, Mullin is reluctant to say things would have been so different under Smith after all. He asserts, “If Labour had tried to tighten regulations in the city, mass hysteria would have been organised by the Tories and their friends. Maybe it was just part of the era we had to live through.”

But before what exactly? Even with the public holding such virulent anti-bankers feelings, Labour remained petrified of the Conservatives’ ‘Red Ed’ taunts of their current leader. Perhaps this is because “the British public seem to believe you can have European levels of public service with American levels of taxation. Well, you can’t. You have to make a choice, and I’m not sure we’ve made that yet.”

As we turn to contemporary politics, Mullin is profoundly concerned about the fate of the poorer areas of the country under the coalition government; “The fear is now the Tories are back again places like Sunderland will go back to where they were 15 or 20 years ago”. George Osborne, disparagingly referred to as “Boy George” by Mullin, patently fills him with dread, and he hopes David Cameron (“a very decent man”) can “rein in” his Chancellor. Otherwise, Mullin “foresee(s) they will collapse a large part of the public sector”.

Predictably, he’s a member of the burgeoning ‘I Disagree with Nick’ camp, although it should be pointed out he was scathing of him before most. He labels Clegg “a complete charlatan”, and says, “I’m not even sure he’ll stand at the next election – unless he switches to the Tories.” Indeed, apart from his firm commitment to the European Union, which separates him from the Conservatives, Mullin says, “in most other respects I think he’s a Tory.” For all Clegg’s ideological similarities with the Tories, however, he believes division between the two parties of the coalition “will be exposed on all sorts of issues”. Nevertheless, Mullin would be surprised if there were an election before 2015; “they’ll hang together because they don’t want hang separately.”

One potential crisis point for the coalition is the alternative vote referendum. However, Mullin is not prepared to opportunistically vote in favour of the status quo, believing AV to be “better” for the voters. He pleas for his party to get behind the alternative vote too, countering the many who think it’d work against Labour’s electoral interests. Mullin says, “It’s not in Labour’s interests for the Liberals to collapse, because the Tories lie second in just about all the seats the Liberals hold. I hope Labour will understand that in due course.”

Since being an MP, Mullin claims he’s missed it surprisingly little. Partly, this is down to the “unexpected success” of his diaries, around which “a small industry has developed”, ensuring he is never short of offers for interviews or talks. He is clearly proud of his career as an MP, though lamenting being “out of the loop” during the last five years of his career. Before this he had been African Minister – “the happiest time of my political life”. He was relieved of this without any explanation, “one of six Africa ministers in eight years”. If the standard of governance as a whole is to improve, Mullin pleas for ministerial “shuffling for shuffling’s sake” to end. 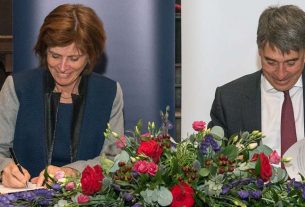