Skip to content
In the basement gallery of The Museum of the History of Science, there is a relic of the most unlikely kind.  It is not a fragment of Saintly bone or a cloth supposedly touched by a religious figure, but rather a humble blackboard, now framed, elevated, and transformed into an artefact for our delectation.  Preserved by a savvy Oxonian after Albert Einstein’s 1931 Rhodes Memorial lecture series, the metaphorical and literal elevation of a mere blackboard into an object of wonderment exemplifies our fascination with the marks of celebrity, though in this case we can observe the chalk marks of the most renowned physicist rather than the illegible signature of a C-list ephemeral wannabe.Einstein lectured in Oxford eighty years ago this month.  By this time he was already an international science superstar and his lectures were given at an exciting time for physics, particularly as Einstein’s theories of relativity were being combined with astronomical data, which indicated that the universe was expanding.  His three lectures, all delivered at Rhodes House, concerned the most fundamental questions in cosmology, some of which can be viewed on the blackboard-cum-museum piece viewable in the museum on Broad Street.  For instance, the first three lines establish an equation for D, the measure of expansion in the universe, and the lower four lines provide numerical values for the expansion, density, radius, and age of the universe.  According to the last line, the age of the universe is probably 10 (or 100) billions years, which is not only a seemingly incomprehensible figure but also an interesting estimate compared to today’s consensus of 15 billion years.

Saved from being wiped, the chalk marks are not only the signature-thoughts of the most famous physicist but they also represent bygone communication methods and how technology, for all its benefits, lacks a certain romance, personal touch, and tangibility that could ever afford it the status of artefact.  I mean, at the risk of sounding like a Luddite, it’s hard to imagine the same veneration for Einstein’s PowerPoint slides, or even his laser-jet printed notes for that matter.  Perhaps we should consider this scientific advancement as the chalk dust settles. 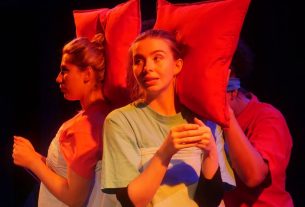 Eat Your Heart Out: a moving, important play

Don’t Be Afraid of the Dark: Nothing to fear