Oxford City Council is to examine claims that Oxford University and Oxford Brookes have far exceeded their quotas for the number of students living in privately rented accommodation.

If the limit has been exceeded, planning permission for further buildings and research facilities may be blocked. The council can prevent the opening of the new Radcliffe Observatory Quarter and Oxford Brookes’ new £150m Gipsy Lane campus.

Residents’ groups in East Oxford believe they have discovered significant anomalies between published figures and the real situation after months spent investigating council tax exemptions, electoral rolls and data obtained through the Freedom of Information Act. Sietske Boeles, of the Divinity Road Area Residents’ Association (DRARA), said there were probably “thousands more students in the city” than reported by the universities.

However, since 2005, 900 homes have registered for council tax exemption because they are occupied solely by students. Furthermore, residents examined the electoral roll and found that many of the 700 houses registered as “single-student occupancy” in fact had several occupants.

Oxford Brookes have admitted to exceeding the quota by almost 500 students. However, Ed Reed, Communications Officer at Oxford Brookes, said the university is working to “reduce the numbers of Oxford Brookes students living in private rented accommodation”. He cited the recent development of 704 student rooms, with 313 more currently being built, combined with a reduction in on-campus graduates by between 10 and 15 per cent, as proof of this. He added that the halls have an occupancy rate of 96 to 97 per cent.

Both universities maintain that they have been honest with figures. Oxford said that the University “agreed a methodology with the City Council in the last year” and that all data is “the subject of external audit”. Boeles said that the universities’ data “lacked validity”. She added that at a planning meeting at Oriel College last year, officials suggested that “the University was massaging its figures”.

However, residents’ associations have simultaneously campaigned against several proposals for purpose-built student housing, most recently against St Hilda’s prospective development near Cowley Road. Boeles admitted there was an apparent contradiction in residents wanting fewer students in private housing while also objecting to new developments. She stressed that the residents groups were “firmly pro-student and pro-university”, but that East Oxford was “saturated” and that purpose-built accommodation should be built in “other areas with good transport links”.

Boeles explained that some roads are 80% student Houses of Multiple Occupancy (HMOs) and that, in the past 15 to 20 years, there has been an “increasing amount of conversions of family houses into student accommodation. Oxford is particularly badly affected as it has two universities.”

She went on to outline the negative impact of a high student population on the area: “there is too much alcohol fuelled antisocial behaviour almost every night” and citing problems of “noise, untidiness, parking problems, and disappearance of shops and services for the elderly and families. Elderly residents live in fear and do not go out any more at night.”

However, Reed named several Brookes schemes which work to improve the community, including ‘walkabouts’, in which local residents talk to the Thames Valley Police and students themselves. Furthermore, their Freshers’ Week included talks from the police to new students. He said that “community meetings are attended by students and Student Union representatives” and added that a year planner is sent to all residents in the area along with a ‘Brookes in the Community’ leaflet.

One student, who did not wish to be named, called it “absurdly perverse” that groups campaigned against building new developments while complaining about student numbers. “If the University can’t put people in private accommodation, and they can’t get planning permission to build their own, do Oxford’s residents expect us to sleep on the streets? We’d make a hell of a lot more noise there.”

Another added that the University seemed to be in a “no-win situation” and said, “Personally I think many students are well-behaved and have a net positive effect on the community. It’s also really important that we experience living on our own before we’ve reached our third decade of life.”

According to Boeles, “it is for the City Council and the Universities, not the residents’ groups, to work together to solve Oxford’s huge housing crisis in the long-term.” ecause they “now have very little trust in the universities’ figures”, DRARA has presented plans to the City Council for an independent monitor to assess the situation and consider where the University can house its students. Following this, the City Council will make the ultimate decision.

Councillor Ed Turner said that although he “did not want to jump to conclusions, residents have done some interesting research, and we will look at that”, but added that “there is some great work being done – led by OUSU – to decrease potential tensions and indeed build valuable links between students and the wider community”.

Nevertheless, he insisted that the only way to prevent the housing crisis from escalating was to impose restrictions on research expansion “otherwise there will simply be more and more students living out with family accommodation being eroded and becoming ever-more expensive”.

‘One Hour a Week’ for Hub 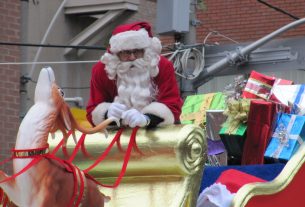 Santa Claus is coming to town… on a reduced budget