Andy Serkis made his breakthrough to near universal acclaim as Gollum in the Lord of the Rings, and this week he returns as Captain Haddock in Spielberg’s Tintin adaptation. However, despite Serkis’ deeply idiosyncratic style, you’d be hard pressed to spot him in either role. Why? Both films use motion capture technology, converting actors’ real movements into animation. Motion capture offers seemingly endless possibilities, allowing directors to shoot real actors and place them in fantastical scenarios. Indeed it prompted both the revered critic Philip French and Time magazine into lauding Avatar, despite its shaky plot and dialogue, as amongst the most important films of the last decade. In short there is only one question to ask. Where did it all go so wrong?

Perhaps you don’t understand what I just said. Surely my description of motion capture contained all the ingredients of an unmitigated success story. People flock to see the films, the critics are backing it to succeed, and to a degree it already has. The harsher reality is that motion capture technology has spawned a string of utterly mediocre movies, Avatar was a two hour visual rollercoaster relying almost solely on impact and novelty and that, much like CGI, the technical wizardry all too often descends into an unwatchable mess.

Take this list of films: Polar Express, Mars Needs Moms, Tron: Legacy, Avatar and A Christmas Carol. They have three things in common, firstly that they all make use of motion capture, secondly that each film cost a bomb to make and thirdly that each one has a script which could generously be called disappointing. Evidently points one and two are related; motion capture is mind bogglingly expensive. Avatar’s budget alone could have gone a decent way to ending world poverty, saving Greece and paying my student loan. And when studios spend a ton of money they like to earn it back hence point three, bad scripts.

The need to make big profits results in films as intellectually dire as they are visually spectacular. Studios who throw money at fancy technology want the world to know, and the best way to show it off is to make every shot a glamorous one. No more low key openings, the way to guarantee big bucks is through lavish, mindless spectacle.

You may wonder whether I think all big budget Hollywood movies ought to be rubbish then. I don’t. Studios have made, and will make, expensive and brilliant films. I just don’t think many of them will be motion capture. And here’s why. The best films are made by directors like Spielberg, Fincher and Nolan, a small handful who have earned their right to originality. The rest will only get big funding if they do what the studio wants, and studio executives tend to prefer flashy action flicks to Brecht adaptations. So most motion capture films will probably look great, sound great, and be forgotten by the time you’ve finished your popcorn.

Motion capture is, in the same way as CGI or 3D, a bit of a gimmick. On one hand you can use it to make Gollum, and Gollum was a great character. His eerie movements, unnerving facial expressions and menace were perfect. Gollum is the good side of motion capture. Unfortunately, for every Gollum there’s a Mars Needs Moms, a film intended as nothing more than a vehicle to show off a new technical process. That’s motion capture’s bad side, people making movies that should never be made, just because they can. If a plot sounds stupid or a line doesn’t work then painting the characters blue and putting them in space isn’t going to help. It’s time someone realised.

I expect that Tintin will be an excellent film, indeed I hope it is because I intend to watch it. But even if it turns out to be Citizen Kane 2 I won’t be cheering. I’ll be sitting at the back, clasping my head and counting down the seconds until Michael Bay jumps on the bandwagon. 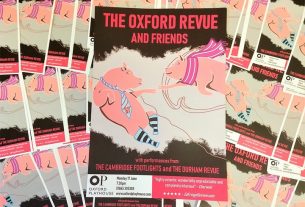 Preview: The hilairious Oxford Revue and Friends at The Oxford Playhouse