Proposition: Embracing sexual objectification is the key to sexual equality

We have a problem. In our society, men get a disproportionate amount of wealth and power, while women mostly appear naked on magazine covers. Women feel like they have to conform to stupid, narrow ideas of beauty to get ahead, whereas men can quite successfully look like something the dog brought in. This is, I agree, a bad thing.

But the problem with this picture is not the fact that men are looking at naked women. Naked women are a wonderful, wonderful thing – indeed, I think our society could do with more of them.Sexualisation should never descend into disrespect (since when has that ever been sexy?), but on the whole, I’m really quite cool with it. What I have a problem with is the inequality of this sexualisation, in a fashion which disproportionately privileges men.

And the solution is, I feel, not less pictures of naked women – it’s more pictures of naked men! If all you’ve got to say about female politicians is that Sarah Palin is hot and Hilary Clinton is not: whatever, it’s your loss… just make sure you also limit yourself to how much hotter Barack Obama is than John McCain! Heck, if construction workers whistle at you, whistle back!

I fervently believe we should challenge oppressive, gendered notions of what it is to be sexy: like that you have to be anorexic to be beautiful. Great – I want to start seeing supermodels who look like they’ve actually had lunch in the past week. Because, damn it all, feminism is sexy! If we want to empower women, feminists have to take over “sexy”, not abandon it to misogynists and corporations!

But this applies to all marginalization. I don’t believe the solution to racism is to tell people to stop making racist jokes – we just need more which make fun of white people! The day that you hear punch-lines about how rich and spoiled white kids are will be the day we know we’re moving in the right direction. Similarly, the day Playgirl (which went out of print in 2009, incidentally) has as large a circulation as Playboy is the day we live in a properly egalitarian society.

Rebuttal: Sexualisation is a major obstacle to female empowerment

What do we think? It’s surprising you even acknowledged that we can think. Your underlying point is quite clear – we should all do what any ‘real woman’ would do and pick up a broom, because there’s a whole load of sweeping generalisations for women to conform to out there. Oh, and while we’re at it, make you a sandwich. Our society has a distorted idea of beauty, but it’s no solution to force men to conform to it as well.

David is asking for the wrong kind of equality. Just as white jokes wouldn’t solve the problem of racism, nor would males appearing naked in magazines solve this problem. We should strive instead to bring about a society in which males and females can function alongside each other as subjects. What we really need is a shift away from this incessant fixation on sexuality and dependence on the gaze of the other, towards a real acceptance, and celebration, of autonomous individuality.

Sexuality is, of course, an inevitable and perfectly acceptable aspect of humanity, but only in its right place. Does it really matter if Sarah Palin is ‘hot’? The Times recently featured a double-page spread covering Theresa May and Ken Clarke’s continuing debate over immigration: at least a third of it was devoted to discussing her choice of shoes. Society’s obsession with sexualisation is one of the primary obstacles to gender equality, not its solution.

Arguing that objectifying everyone would solve the whole issue of sexual objectification is typical of oh-so-annoying male thinking. As a complex being, the woman doesn’t see men (or women) as mere sex-toys. Naked bodies aren’t enough to get us going. We do have a problem: David is applying a male narrative of sexualisation to naked bodies. What he proposes would only be a further imposition of male thinking onto females.

If your chosen career is to take your clothes off –and we support a woman’s right to do so – then objectify away, but please make some distinction: ‘womankind’ are not one homogenous mass. Just as we might wolf-whistle Enrique Iglesias in Speedos, but never a be-suited politician, we would appreciate the same courtesy. What we do not need is a world in which politicians are judged on the basis of some adolescent ‘hot or not’ competition, nor one in which a woman’s right to drool dreamy-eyed over a picture of Brad Pitt naked is taken as proof that the battle for gender equality has been won. 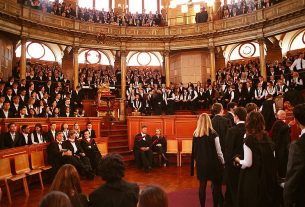