Ten new scholarships will be granted to graduates intending to do the one-year Master of Public Policy degree at Oxford University’s new Blavatnik School of Government.

Enabling around one-third of students in the initial cohort in 2012 to potentially receive full funding, covering tuition fees as well as living costs, with a £47,250 cap, the scholarships will be awarded so that the most able students in the world will have the opportunity to study at the Blavatnik School, without being restrained by their financial circumstances.

A second-year PPE student was interested by the announcement. She said: “While as an American I’d personally like there to be as many scholarships as I would be eligible for as possible, should I apply. I’m glad to see that they are actively seeking future leaders from transitional economies through the Chevening-Weidenfeld Scholarships. These will help to make the new School of Government truly global. However, I am concerned that much of Africa and all of Latin America has been left out of the targeted scholarships.”

Professor Andrew Hamilton, Vice-Chancellor of the University, stated: “We hope this very generous funding package will attract the world’s very best students to Oxford, where they will be trained as future world leaders.”

The Blavatnik School of Government will begin accepting students in 2012, following a £75 million endowment by American industrialist and philanthropist Leonard Blavatnik. The School is already accepting applications and its initial aim is to admit practitioners and students from all over the globe. The application deadline for the 2012 cohort is 20th January 2012 for the first round of applications and 9th March 2012 for the second round.

The School will teach the practice of government and leadership with a focus on strengthening communities, creating opportunities and fostering international cooperation through various courses, balancing the humanities, social sciences, law, science, technology, health, finance, medicine and ethics. 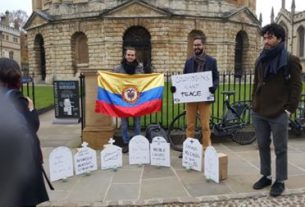