I was not even meant to go and see it, but with a few hours to spare in London I looked up current plays in London and called up to see if there were any spare tickets for Hamlet: luckily, the Young Vic had an empty seat for the night and I was definitely glad I bought the ticket. So many people take a Shakespearean play into a modern setting, but it is extremely rare and special for a production to pull it off entirely: but the Young Vic’s production of Hamlet with Michael Sheen in the starring role has accomplished this daunting task. Eerie, fresh, innovative and exciting this completely trumped any Shakespeare play I have ever seen.

On the phone, I was told to arrive at least thirty minutes before performance time to experience the mysterious ‘pre-show journey’: I was intrigued and keen not to miss out on anything that fully immersed me in the theatrical experience so thought, why not? It turned out that the pre-show journey was an interesting way of firmly establishing the cold and clinical setting of a mental asylum in the minds of the audience members. On arrival, the first fifty of us audience members were taken round the back of theatre and led through pale green corridors adorned with notice-boards: eerily quaint music accompanied us in our journey as we passed soundproofed windows, looking into a gymnasium where men in blue scrubs were playing with a ball. An announcement telling us to turn off all electronic devices due to their interference with ‘treatments’ was a phrase that stood out as an unusual take on the conventional ‘please turn off your mobile phones’.

Wily, electric and energetic, Michael Sheen’s Hamlet is a mental patient who is refused leave from the asylum by James Clyde’s therapist Claudius who charmingly manipulates everyone around him in his Joker-like purple suit. The hexagonal shape of the theatre-in-the-round performance space was well-suited to the confidential manner of Sheen’s soliloquies, making the audience wonder whether they themselves are extensions of Hamlet’s state of mental delusion. The ghost of Hamlet’s father was in fact an illusory figure created from Hamlet’s psychological derangement and when Gertrude proclaims that she cannot see the ghost, Hamlet’s slow realisation of his own insanity is poignantly illustrated by Sheen.

Due to Benedict Wong’s strong performance, his Laertes was the first with whom I have actually been able to empathise. Female actors, Eileen Walsh and Hayley Carmichael play the roles of the normally male Rosencrantz and Horatio which gave new, interesting dimensions to both characters: the intimacy of Horatio’s relationship with Hamlet became more touchingly apparent; whilst together with Adeel Akhtar’s Guildenstern, Hamlet’s unfair change in his regard for his friends was more sympathetic towards them.

The whole setting of a mental asylum worked brilliantly: Michael Gould’s Polonius became a well-meaning, bumbling doctor armed with a tape recorder and Sally Dexter’s smiling pill-popping Gertrude was wonderfully away-with-the-fairies. Normally, Ophelia’s descent into lunacy is not performed effectively, but Vinette Robinson executes this superbly: the scene in which she is desperately singing as she’s become confined to a wheelchair was one the most moving scene in the play. Best of all, was the ‘To be or not to be’ soliloquy where Hamlet’s grapple with the human condition and with himself was clearly and powerfully conveyed by Sheen. The exceptional standard of acting by every single cast member was equalled by the adventurous use of the set, above all the large rectangular pit that was created from a chunk of the stage being flown out in the second half. At the end of the play, young Fortinbras and his men came dressed in black with masks to take over the asylum and do a clean-up, covering the pit now full of all the dead bodies with crime scene black liner. When young Fortinbras removes his mask, the audience are left wondering whether the whole experience has been a purging process of Hamlet’s troubled mind and the corrupt surrounding which has driven him to madness.

Five stars to an outstanding production that is an illuminating experience of Shakespeare’s finest play.

Why do we laugh at satire? 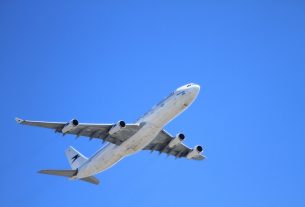 How to survive inflight entertainment