Tributes have been paid to Professor Steven Rawlings, the Oxford tutor who was found dead last Wednesday night in Southmoor near Abingdon.

Rawlings, a Physics professor elected to a St Peter’s fellowship in 1994, was found dead at the home of Dr Devinder Sivia, a 49-year old St John’s College fellow who was arrested on suspicion of murder and released on police bail on Friday 13th January until 18th April.

Rawlings’ family have said they do not believe he was murdered and that his death was a “tragic accident.”

Dr Sivia and Prof Rawlings, 50, had been friends for 30 years. They co-authored a book together titled Foundations of Science and Mathematics.

Rawlings’ career was devoted to lecturing and tutoring university students and researching how the universe evolved.

He had a PhD from Cambridge and a DPhil from Oxford before becoming Head of the sub-Department of Astrophysics at Oxford from 2005-2010.

He is perhaps best remembered in his field as one of the leading scientists on the Square Kilometre Array, a project that his colleague Dr Chris Lintott told the Telegraph is “going to revolutionise our view of the universe and it’s no exaggeration to say that without him it wouldn’t exist.”

Steven Rawlings was married to Linda and they lived in Letcombe Regis, Oxfordshire.

“Steve was a well-loved, caring, intelligent, sensitive man. He and Devinder were best friends since college and I believe this is a tragic accident.

Steve is a man of integrity, kindness and a very accessible person.

He was the love of my life and we have known each other all of these years and he has never changed, even though he has achieved so much and has all these qualities.

Steve was a scientist of world renown and distinction. I could not hope to begin to explain the physics and maths of his work as an Astrophysicist but I was gripped by his involvement in the Square Kilometre Array project – which will link thousands of telescopes to provide some answers to some of the most fundamental questions about the Big Bang and Dark Matter. I started speaking to him about it shortly after I was elected here and was totally captivated. Steve indulged my ignorance and patiently spent a couple of hours telling me how it could work and what questions it could answer.

Steve taught first year undergraduates here at St Peter’s and was a very welcome presence for all of us.  No matter the size of his achievements – he was hugely modest, utterly lacking pomposity and always friendly.  He was also one of the Fellows who looked as if he could hold a cricket bat the right way around when it came to the students v Fellows summer cricket match.

So we have lost someone of great academic distinction who will not now see his immense work on the SKA come to fruition.  And we have lost too a colleague – and a very, very nice man.

The Department of Physics:

His immense efforts varied from persuasion at political levels, to simulations of what might be detected by differently designed telescopes, to studies of how to meet the enormous computational challenges the SKA would bring. He was motivated by the scientific goals of these next-generation telescopes: measuring the distribution of hydrogen in the Universe since the Big Bang, discerning the nature of the Dark Energy said to pervade the Universe, measuring the accretion history of the Universe, and the influence of radio galaxies on the formation of structures such as galaxies and clusters. He also contributed greatly to studies of the Sunyaev-Zeldovich effect: the imprint on the Cosmic Microwave Background of hot electrons captured in the deep potential wells of clusters of galaxies. Steve Rawlings’ creativity in these and many other areas greatly enriched the field, and will have an enduring influence on it.

Steve was not only an excellent scientist but also a dedicated tutor and mentor – he was central to much of what happens in Oxford Astrophysics through his role as Head of Astrophysics and in many other ways. Steve was inclusive and supportive and engendered those values in all who interacted with him. He was also great fun: many former students and colleagues around the world will recall playing football or cricket with him. Steve’s personality and values permeate our activities. He will be very sadly missed by all. Our thoughts and prayers are with Linda, and his family at this very sad time.

Third-year: “He was a very good tutor. He never accepted that I was too stupid to do something. It’s completely out of the blue.”

Former student: “He was really, really lovely, really nice and sweet. He used to lecture and was really popular on the lecture course, showing his good sense of humour with lots of jokes.” 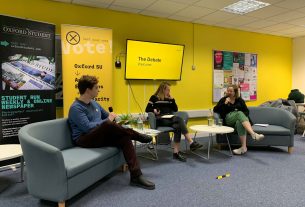