Skip to content
It’s that time of year again – the Turl Street Art Festival is upon us! An annual stream of creative events lasting an entire week, three Turl Street colleges – Jesus, Exeter and Lincoln – unite to produce a whirlwind of music, art, fashion and drama, providing a welcome and inspiring break to the busy Oxford term.
Naomi Charatan, the president of this year’s TSAF, told me why the 2012 festival should be bigger and better than the previous weeks. “Although the festival is run by students, and inevitably contains many events starring students, this year some events are hosted by professional musicians. We have really tried to take advantage of the beautiful chapels in the hosting colleges, too.”
Exeter’s chapel is a venue to the Oxford Baroque, performing on the 18th February, and Lincoln’s is home to the Harpsichord master-class and concert. The festival’s music scene extends beyond the classical though, because for the first time in a number of years, the festival is putting on their own version of the hit show West Side Story, on Thursday and Friday of this week.
“Many colleges run an arts week, but TSAF is one of the only festivals that involves such a collaboration between colleges,” Naomi tells me, when I ask about the motivation behind the festival. “It is a great opportunity for the small Turl Street colleges to put on something open to the whole university. It’s fantastic to get as many people as possible involved in the arts – it can be quite daunting to get involved on a university-wide scale, but taking part in a local festival is a simple way to overcome this barrier.”
The fact that the festival is intimate does not, however, affect the quality of events; there is a lot of talent to be found amongst the colleges. “Almost everyone at the three colleges will be getting involved, whether it’s via organising, performing, attending concerts… or just getting drunk at our launch party!”
Naomi is a music student, and so with a passion for the arts under her wing, she has tried to ensure there is something for everyone at TSAF. “It’s important that everyone can find something that they can appreciate. I’ve also been really eager to get local musicians involved, which I hope will go down well; the committee this year has really tried to reach out to the public and not just to students. There seems no reason for us not to include everyone, and we have rethought our publicity strategy to achieve this.”
The established committee includes 16 people – a president, secretary, treasurer, two reps from each college, publicity officers, website officers, a scheduler, a sponsorship rep, and the college Chaplains. Alongside such a large group, there are volunteers at each college organising individual events; it really does take a huge amount of teamwork and organisation to pull off the entire week.
“This year’s festival has a strong emphasis on music,” Naomi admits, when I ask what’s missing. “I would have liked to have seen some more drama, perhaps even some comedy. But the events depend entirely on the interests of the students in the colleges, and it just so happens that this year drama and art have been less popular than the music.” Having said that, the play ‘The Players’, by Jesus student Matt Parvin, was a success on Monday, and there is an art exhibition lasting the whole week in the Jesus College Ship Street Centre.
The finale concert on Saturday 18th February brings together the entire festival, showing the distinct collaboration between the three colleges. Directed by Senior Organ Scholar Joshua Hales from Exeter, the programme sees Mozart’s Symphony No.40 and the rarely performed C Minor Mass, played by a university-wide orchestra and a Turl Street college chorus. “Joshua has been rehearsing the choir hard on Saturday mornings all term!” Naomi declares. “It is a fantastic programme and in the beautiful Exeter Chapel. It’s the one event I think people should not miss.”
When I ask her if she has enjoyed her time as president, she tells me it has been stressful, but worth all of the effort. And her top tip for the president of next year’s festival? “Start organising early!” she warns. “We started planning at the beginning of Michaelmas term, and I still felt like I needed more time!”
That’s not noticeable, however. Turl Street Art Festival has been a raving success so far, and the ambition to include more local Oxford residents is a positive and judicious move. Hopefully the week will end on as high a note as it begun (no intention for a musical pun), and let’s just see what next year brings…
Claire Davis 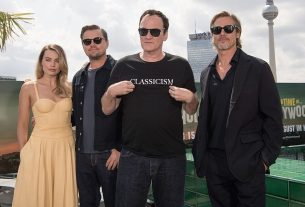 Once Upon a Time in Hollywood: Entertaining, yet uneven