Against a sorry background of overthrown regimes and civil wars in Africa reaching the height of British consciousness, the House passed the motion ‘This House Believes That Africa’s Fate Is Better Left To Its Own People’.

Speaking in proposition was Richard Dowden, a former journalist and now Director of the Royal African Society. Expressing his love for Africa, he spoke optimistically about the potential for the African people to develop their own future and led the theme that the true character of the African people was not fully heard or understood by many people outside the continent.

Dowden’s debating team was made up of John Hilary, appointed head of anti-poverty charity War On Want in 2008, Angus Kennedy, Head of External Relations at the Institute of Ideas, and Rebecca Scott, a St Anne’s student.

Opposing them was influential author and cultural critic Diran Adebayo and Paul Spray, Director of Policy at Traidcraft. Spray reminded the audience that globalisation and trade, rather then imperilling the continent, held the promise of development for Africa.

One thing that the speakers had in common was that they had at some point in their lives worked as schoolteachers, some in Africa, and all hated imperialism. This gave an additional fascinating dimension to the debate; while they disagreed on what to do, they were united in sharing a passion for Africa and Africans.

If anything, however, this passion contributed to making this a particularly enthralling debate, the intensity of which was appreciated by the night’s spectators.
Central to the arguments was the potential of the African people to decide their fate unaided by the outside world, and the possibility of African nations blazing a totally new path of development. The opposition speakers propounded the virtues of trade and interdependence but some on the proposition, such as John Hilary, disagreed and highlighted the damaging impact he felt globalisation was having on poverty in the continent.

Joining the opposition was James Lester, the Hertford student who set up last year’s Oxford African Film Festival for charity, and Nick Ericsson, an African born journalist and editor for the World Service. Like many of the speakers, Ericsson had seen first-hand the state of some of the worst parts of the continent, which provided an interesting insight for the packed audience in the chamber. In 2008 Ericsson directed the BBC’s coverage of the Zimbabwean elections – a tough ask, considering the corporation was meant to be banned by Robert Mugabe.

While it seems odd that the future of a vast continent could be decided in a debating chamber in wintry England, the debate raised up intriguing questions for Oxford students who were there. Whatever the future of Africa, the Oxford Union believes this future is up to the Africans themselves. 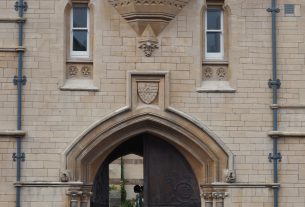 St Peter’s bar to lose status as cheapest in Oxford