A lot of people thought the iPhone 4S was an anticlimax. The first release since the death of Apple’s guiding light Steve Jobs left many expectant fans underwhelmed. Wasn’t it just another iPhone 4?

While the tech specs are doing all the dirty work and truly revolutionising each new iPhone, what makes them sell is the buzz that’s created by their own unique, tangible and user-friendly gimmick. The 3GS offered dramatically faster mobile internet. The 4 offered a whole host of new features including a Retina display and, most importantly, a total redesign of the phone. When there the 4S came, while most things looked very similar to the 4, it still had its headline grabber: Siri.

Siri is a personal assistant built into the latest iPhones. Using voice recognition software, you can command Siri to do any of your phone’s functions and even search the web for any information you need be it train times, how to make risotto or the nearest Thai restaurant. Siri is the cool gimmick that you don’t want to be without and makes Siri-less iPhone 4 redundant.

Unfortunately, Siri’s location functions are currently only offered in the US and only available through using US English so only Americans can use it to find local businesses and the like. Still, Apple have said that it’ll be available in the UK this year so all was well.

Yesterday, however, things started to unravel when an app called Evi shot to the top of the iPhone App charts with over 200,000 downloads. Priced at just 69p, Evi was creasted by Cambridge-based True Knowledge and offers a very strong rival to Siri with a lot of the same features. Most importantly for customers here, Evi offers location software in the UK. It currently boasts an ever-growing knowledge of 635 million facts and counting!

That’s not to say that Evi is better than Siri. The interface isn’t as pleasing for one, Siri is much sleeker. Likewise, Siri’s integration with Wolfram Alpha means it has a lot of very accurate information. Siri is also much more reliable – Evi users have peppered the App Store with complaints of receiving this ‘server busy’ notification a bit too often. Not much good if you want to find the nearest public toilet!

The point is that Apple’s show-stealer, the thing that immediately made the 4S different from every other phone on the market is no more. It’s not only now available for less that a pound on every iPhone model and therefore reducing the need for iPhone owners to upgrade, it’s also available on Android phones reducing the need to get an iPhone whatsoever.

Apple have responded by saying that they may remove Evi from the App Store since it bears a very similar name to Siri and may confuse some users. Other sources claim that Apple is going to work with Evi to smooth out the similarities with Siri. Either of these may work in the short run but in the long run Apple’s sluggishness to bring out location functionality for Siri users outside the US and the fact that the simplicity of the 4S’s unique trait has been unveiled will leave many who are to have the most cutting-edge phone on the market feeling thoroughly disgruntled. 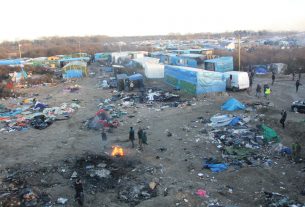 Why aren’t we talking about the Calais refugees?

Francis Delaney: One Man, One Goal