Dancehall music, a derivative form of reggae and sometimes considered the predecessor of rap, is a genre of urban folk music that often consists of the layering of speech over pre-recorded music. Think reggae meets relaxed rap. This musical style native to Jamaica first became popular in the ‘70s before becoming the dominant music of the 80s and 90s. Dancehall embodies collective memory as narrated by its deejays; often evoking themes or everyday situations encountered in postcolonial Jamaica, dancehall first began as a form of response to political turbulence and social inequalities before gradually becoming spaces of negotiation that provided opportunities for representation, depictions of power relationships and attempts to establish autonomy.

Various sources indicate that dancehall first emerged in the late 1970s in Kingston, Jamaica. Dance halls in Kingston, in trying to attract younger audiences, often played popular tracks – often from the United States – over their public sound systems. Eventually, this tendency towards global and dominant forms of music shifted to becoming more focused on the local, as reflected by the introduction of lyrics that spoke to vernacular knowledge and used informal colloquialisms.  Lyrics that were predominantly political become more sexual in nature over time, as exemplified with the work of Yellowman. Other stylistic origins include reggae, R&B, ska, rocksteady, and dub.

Beenie Man, Sizzla, Ninjaman, Bounty Killer, Shabba Ranks, and the aforementioned Yellowman. This last artist is especially important to the history of dancehall as he introduced the concept of “slackness,” a slang term that refers to vulgar and sexually explicit lyrics. Yellowman’s career significantly features the moment that marks the shift of popularity from reggae to dancehall music in Jamaica. Contemporary pop artists such as Rihanna, Kat DeLuna, Elephant Man and Sean Paul often incorporate elements of dancehall.

What came next? In addition to rap, dancehall is further credited with the engendering of musical genres such as grime and reggaeton. Ragga is a sub-form of dancehall and can be distinguished by the use of digital equipment and synthesizing of vocals. 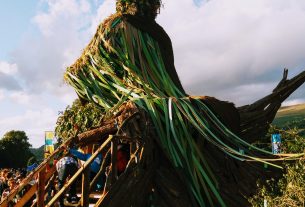 Clearing up misconceptions of opera in Oxford