Exeter College JCR has passed a motion this week setting up secret voting for all future meetings.

The motion explained that “JCR motions can be controversial” and that “members of the JCR can feel uncomfortable voting on JCR motions publicly [sic], especially if they are friends with someone who supports a motion they oppose”.

The motion was put forward at Sunday night’s meeting by the Secretary, Adam Ward, and was seconded by the President, Benjamin Clayton.

It proposed secret ballots: “Each member of the JCR will be given a ballot paper at the beginning of the meeting by the JCR Secretary and will mark a cross in the column for or against a vote.  The ballot paper will make it explicit as to which motion is which so JCR members are sure to know which motion they are voting on.”

After votes are collected at the end of the meeting, the President, Secretary and Treasurer will count the votes and announce the results, as well as sending an email to all JCR members.

JCR President Clayton said: “It is imperative that members of the Exeter JCR have the opportunity to make informed decisions free from any pressure or bias… The decision of the JCR to vote from now on by secret ballot is one I am very happy with; each member should be able to have their equal and free say.

“The process will be entirely transparent and operated with exemplary efficiency, producing quick results. Perhaps it will also add a little excitement to the results of JCR meetings.”

Lydia Stephens, a first year classicist at Exeter said: “This sounds like it would be an improvement on the current system. It is certainly possible that people who either aren’t voting at all, or who would vote differently, do so at the moment as they don’t feel they can [vote for their true opinion] under the gaze of their peers”, adding that there was “certainly nothing to lose.”

Imogen West-Knights, a second year English student, said: “It is a bit over the top probably but there doesn’t seem to be any other sensible way to keep things fair over contentious issues.”

Hannah Dickens, a third year PPE student, said: “I definitely think it’s a good idea. I don’t think it’s that OTT really, because if it wasn’t an issue then it wouldn’t have been raised as a motion in the first place.”

She also referred to a motion which was rejected on Sunday, proposing that leavers donate towards a fund to cover one wall of the JCR with oak panelling. “All that stuff… was definitely an issue for that – I know some people would have voted in favour of it if there hadn’t been such a general negative attitude about it [and] people jumping on the bandwagon.

“I don’t know if it will make much difference to the results of votes but it should at least make a difference to how people feel about it.” 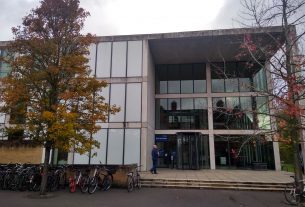 One in five graduates earns less than the average school leaver