Coachella Festival saw hundreds of thousands of sun-drenched fans entertained by artists from Radiohead to Azealia Banks. But by far the biggest talking point of the festival was the show put on by Dr Dre and Snoop Dogg. Was this because of the three-song guest spot from 50 Cent? Was it the other one from Eminem? Nope, the most talked about moment of Coachella was the holographic appearance of deceased rapper Tupac.

And it bloody well should have been. Ok, so it was a projection onto a 2D surface and not a hologram, whatever; anyone can see from the videos online that the illusion works well, and the crowd’s ecstatic reaction is impossible to miss. For most West Coast hip hop fans, never being able to see Tupac perform live is a cruel tragedy of the highest order, so why not give them the opportunity to do so, if the technology is available?

Big rap shows have always prioritised spectacle and surprise above concerns for anything else: Dre and Snoop’s 2000 “Up in Smoke” Tour saw a giant, joint-smoking skull descend over the audience and the two rappers disappear only to drive back onto the stage in a lowrider. Has Tupac’s memory been dishonoured? It’s worth noting that the many albums of posthumous material put together from his unreleased verses amount to the same thing; it’s a way of continuing to enjoy Tupac’s legacy. The implication is that hologram technology is going to spread and start filling more and more stages over time.  But as long as the songs stay the same and a respect for the on-stage presence of the artist is maintained, I don’t think the reanimation of deceased hip hop stars poses any moral or artistic problems.

But what about other genres? Doesn’t the idea of Grohl and co. performing behind a projection of an eternally young Kurt Cobain make you want to vomit a little? Well, realistically it doesn’t seem likely that those bands whose fan bases will reject the idea will be targeted for the rise of the hologram. The quasi-spiritual artist-crowd dynamic of a Jimi Hendrix performance wouldn’t work as a projection, so it won’t happen. This writer’s advice is: sleep easy and get ready to book tickets for Biggie Smalls 2013.

Would you like to see Elvis Presley perform alongside Justin Bieber? No, neither would I. Unfortunately, however, Coachella’s CGI Tupac has set in motion an idea which, flying in the face of reason, respect and all that we love about music, cannot be stopped.

No one but the stuffiest traditionalist would deny that multimedia can enrich a performance. Gorillaz’ hologram shows way back in 2005 looked fantastic, a real ‘wish you were there’ moment. The technology undeniably added an extra dimension to the experience, and the pun is very much intended:  the presence of the rogue cartoon apes on stage was powerful because it made fiction a temporary reality – 2D became 3D. Yet the ambitions of Dr Dre have managed to do the opposite: Tupac Shakur, a giant of a man overflowing with passion and drive, a true great who left a lasting legacy for hip-hop music, has been reduced to a brief 2D projection. And the worst thing is, it’s being passed off as progress.

Evidently none of us can know whether Shakur would care. His mother, reportedly, is thrilled, and it is perfectly possible that he’d laugh rather than turn in his grave. But no one has the authority to decide for him, and unfortunately, that’s exactly what they have done.

This was a one-off, we’re told, but popular excitement and the dollar-lust of many a company have already been piqued, and still no one stops to think. There are already plans to take this further. Jimi Hendrix. Michael Jackson. Kurt Cobain. One would expect rock fans to be up in arms, but the truth is, people will flock to be in the ‘presence’ of their favourite dead stars, or ‘delebs’. Whitney Houston is not 3 months gone – the grief of her passing is very much fresh for many – and already there is talk of her being a future target. It’s Madame Tussauds gone horribly wrong.

The ghostly Tupac might seem like a gift for the old fan or young hip-hop enthusiast who never got to see him perform. But ultimately, the absence of those who have died is a bitter pill that we must swallow; rather than succumbing to a paralysing nostalgia, we should respect them for the lives they did lead. 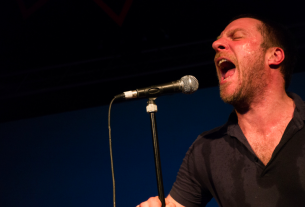