Police are appealing for witnesses after burglars spent up to five hours taking tobacco and money from a newsagent in George Street.

Three offenders removed bricks in the back wall of Caspian News on the night of 18th April at around 1am. They are believed to have gone back and forth from the building at least three times and left with a large suitcase.

Residents have since reported hearing loud noises for four or five hours, but it was only when a worker at an adjacent building site saw the break-in that police were called.

Hundreds of cigarettes and an undisclosed amount of cash were taken from the newsagents, which currently has neighbours on both sides undergoing building work.

PC Stuart McLaren said: “The offenders were seen walking to and from the scene via Walton Street through Gloucester Green.

“I suspect the offenders are local to Oxford and had prior knowledge of the location. They would have had to plan this offence and could have been acting suspiciously around the scene in the days leading up to the offence.”

He also said that in the early morning “they passed a number of members of the public” and described the offenders as two white men, both in their mid-twenties and around 5ft 11ins, and a third man who is black, in his late twenties or early thirties.

Employees at the store have been told not to comment by the owner, who is currently overseas and unavailable.

A member of staff at La Croissanterie, opposite Caspian News, said that he was “not at all surprised” at the burglary. He said that his own café had been targeted four times in a period of less than a year.

The first time, a ventilation panel was removed and almost £1,700 stolen, the employee said. A few days later they returned with a drill enabling them to break into the safe, but were interrupted when two people having a fight outside fell into La Croissanterie’s window and broke it.

The most recent burglary came on St. Patrick’s Day this year, when window bars in the toilet were bent, allowing burglars to steal between £200 and £300.

The employee said there was no proof that the burglars were the same, but pointed out that both were planned offences which suggested good knowledge of the George Street area.

Thames Valley Police have not linked the burglaries at the two establishments and have made no arrests so far in the case.

Anyone with information should call PC McLaren on 101 or Crimestoppers anonymously on 0800 555111. 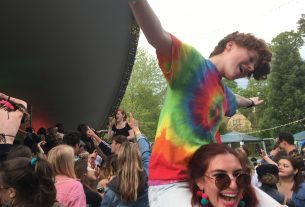 OxStu gives a run down of Wadstock