Skip to content
Heather Stevens muses on the curious habitats of a kleptomaniac bird
Like many physics undergraduates, the male bowerbird is famed for building structures out of twigs and then decorating them with brightly coloured objects in an attempt to attract a mate. Unlike with many physics undergraduates, the ultimate result of this behaviour tends towards copulation rather than crying. Called “bowers”, and lending the birds their name, these structures have been known for some time to affect the mating success of their architects. Now new research, published in Current Biology last week, has revealed that the courtship rituals of the male spotted bowerbird may extend beyond construction and into cultivation.
There are 20 species of bowerbird, and each varies in both the structure of its bower and the objects used to embellish it. The decoration of choice for a population of spotted bowerbirds at Taunton National Park in Central Queensland, studied by a team of researchers led by Dr Joah Madden, is the bright green fruit of the potato bush, Solanum ellipticum. Almost a decade ago, Madden discovered that the more of these fruits that were displayed upon a bower, the more successful its owner was in enticing a female. Now he and his team have found that unusually high numbers of potato bush plants grow in the immediate vicinity of bowers, and that fruits growing on plants close to bowers are more green in colour – closer to the birds’ preferred hue – than those growing on plants further away. This is not because male bowerbirds are actively searching out and choosing to build on sites with lots of these plants. Rather, their numbers within a site increase following occupation by the bird. Male spotted bowerbirds seem to be cultivating the plants themselves.
Cultivation is not unheard of in non-humans. In fact, although rare, it is taxonomically widespread; ants, damsel fish and amoebae cultivate fungi, algae and bacteria respectively. What is unusual about the behaviour of the bowerbird, however, is that the plants are not being cultivated for food. Their fruits are not eaten, but instead used to adorn the carefully constructed bowers that play a key role in their sexual displays, and this represents the first known example of cultivation for a purpose other than food by a species other than humans.
The researchers did not, however, find any evidence that this cultivation is intentional. When the fruits on their bowers begin to degrade and lose their attractive appearance, the birds remove and discard them nearby, where the seeds germinate. The bowerbird’s attention to aesthetics means that the area surrounding their bowers are kept free from leaf litter, producing ideal conditions for the potato bush to thrive, and leaving the bird with a handy, accessible supply of attractive ornaments to tempt mates in future years.
Read more by Heather: http://abrasiveshrub.wordpress.com/
PHOTO/Davida3 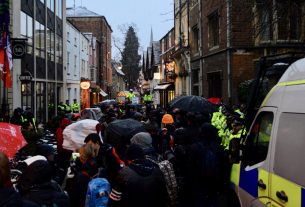