From Miami to Lib-iza, the famous Breakfast Club at Worcester College are on tour this week – a tour of Oxford libraries as they hit the books in the run-up to exams.

Determined to “epitomise the lad spirit through the toughest of times”, the self-proclaimed “Library Lads on Tour” have embarked on a mission to spend every day this week studying in a different University library.

The tour, with around 25 core participants, began in the Bodleian on Monday. This was followed by trips to the Radcliffe Science Library and the Social Sciences Library.

The Library Lads have had special red polo shirts made, complete with a tour itinerary and “lad nicknames” on the reverse.

Alex Hunt, the Library Tour President, explained: “Last year, we all spent a lot of time in the library. We’re also all bloody lads, so we decided to combine the two.”

Judging the success of the tour so far, he commented that the Bodleian had been “very nice”, but that the RSL was “not so pleasant”.

Each day begins with a leisurely trip to the Breakfast Club, before they descend en masse to their library of choice at 9am. They normally would make it through to about 3 or 4 in the afternoon, but Hunt said that he stayed until closing time at 10pm.

About a quarter of the tour lads are dedicated first years. Stuart Walter, a first year economics and management student, said: “I know Hunty from rowing, and I needed an excuse to work. It’s always a good laugh in the morning.”

He continued: “I got some weird looks wearing the red touring t-shirt when I walked into a lecture, but I reckon it’s just jealousy.”

However, Thomas Calder-Smith, an engineering finalist, was keen to emphasise that this was “no joke” and that they were “here to work”. Yet, he did also say that it was effective for breaking up the monotony of revision, and that “so far it’s gone pretty well”.

Calder-Smith commented on a lack of freshers on Wednesday morning, putting it down to the fact “there was a Bop last night, apparently”.

Thursday was due to become Suited Up Thursday as they all planned to don jackets and ties over their iconic tee, to avoid “compromising standards”, according to Alex O’Bryan-Tear, a third year psychology student.

Summing up the entire experience, Hunt said: “This tour really just embodies the spirit of lads all over.”

The Breakfast Club is best known for Half-Naked-Half-Hours, in which up to 40 students at a time would take their tops off in the library every Wednesday afternoon. The tradition started in 2009 and lasted for almost two years.

However, in June 2011, after a spate of complaints, the Librarians asked students to cease the weekly ritual and warned them of possible disciplinary action.

Anand Patel, a law student at the College, also said: “The Breakfast Club is an immemorial part of Worcester College.” 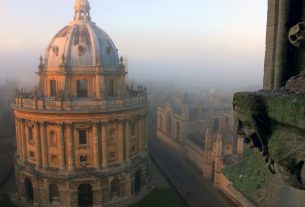