A fifteen-year-old boy, who has been named as Hussain Mohammed, has died after jumping into the Isis stretch of the River Thames.

Emergency services were called to Donnington Bridge, in south Oxford, at about 8.30pm on Friday night after a group of young people were said to have jumped into the river. It is alleged that they jumped in the river to cool off.

A body was recovered from the water two hours later at around 10.30pm and immediately taken ashore. The boy was pronounced dead at the John Radcliffe Hospital shortly afterwards.

The fire service, along with several ambulances and police cars, were present at the scene, as well as two boats on the water and one kayak. Emergency services were also searching in the trees with torches.

Hussain is said to have jumped in with a friend, who is reported to have been Megan Simmons, 16.

A witness has said that both surfaced for a moment in the river, but Hussain was unable to swim and shouted for help, while Megan managed to swim to the riverbank.

Reports about what happened to Simmons were unclear, with one person at the scene saying that she had been taken to hospital and another saying he saw her on the bridge itself.

Several others, including members of City of Oxford Rowing Club, reportedly jumped in to search for Hussain, but could not find him.

A large crowd of roughly 80 people congregated on the bridge, with some saying they had been there for up to three hours, although only around 20 remained when the body was lifted from the water.

The crowd contained several young children as well as teenagers and adults. One local man, who asked to remain anonymous, said: “I’ve lived here all my life and know most people in the area. Nobody seems to know who it is, I just hope it’s not someone I know.”

The police then quickly cleared the scene, although Donnington Bridge Road remained open to traffic.

The incident is not believed to be connected with Summer Eights, which is taking place this week, but a minute’s silence was held on the final day of the races.

Oxford University Rowing Club tweeted: “We just observed a minute of silence for the tragic event that happened last night. Our hearts go out to the family affected.”

Pembroke College Boat Club sent out a message saying: “All crews should behave with a certain degree of decorum below the gut, do not go mad celebrating your bumps – by all means celebrate when back at the boathouses though.

“Please do not enter the water at any point. So all crews – no throwing in coxes, no swimming after your race. Spectators please also refrain from doing so.”

One person, who witnessed the people jumping into the river, said that a group of around 20 people had jumped into the Isis. This report was corroborated by another local person who said he believed the teenagers had been drinking.

On Saturday morning, flowers and tributes were left at Donnington Bridge by friends of the boy.

Another message said: “The good ones are always taken. I’m going to miss you. Keep smiling and sleep tight.”

A police spokesman said: “Thames Valley Police were called to an incident at the river at Weirs Lane, Oxford at around 8.30pm. It was reported a teenage boy had jumped into the River Thames but had not resurfaced. Following an extensive search by emergency crews he was recovered at about 10.20pm and taken to JR2 Hospital where he was pronounced dead.”

Detective Inspector Rob France, who is leading the case, said: “The incident is not being treated as suspicious, however it is essential that we understand as fully as possible the events leading up to the tragic death of this young man.”

France warned others against jumping into the river. He said: “We would also like to emphasise that while it might be tempting to jump into the river during this hot weather, there are hidden dangers under the water and so we would advise against doing so.”

The witness said that the nearby Sea Cadets centre was training on the water at the time, and that an instructor went over in a powerboat. She was forced to turn off the engine and go back to shore to avoid the risk of causing harm to those in the water. 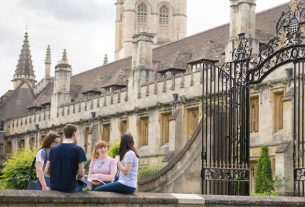