By Agnieszka Fal and Daniel DiFrancesco, of the Oxford Burma Alliance

In recent months the attention of the international community has turned towards Burma, and many column inches have been spent in discussing the democratic reforms, which started at the end of last year, and the enthusiasm with which international leaders have received them. Yet an issue that is notoriously overlooked is the ongoing armed conflict within the country, and especially the fate of those who have been forced to leave their homes as a result. These people become known as internally displaced persons (IDPs), and even though there is estimated to be over 650,000 of them in Burma, living in relocation sites, in ceasefire areas or in hiding, they receive little or no media attention.

Displacement can occur for a variety of reasons –  the most obvious being as a direct result of armed conflict between insurgents, but also for other reasons, including the plethora of abuses which follow: land confiscation by the armed groups (often for the extraction of natural resources), predatory taxation and forced labour. Due to the sheer magnitude and severity of these abuses, it is often argued that they constitute crimes against humanity.

Yet the government seems to be moving in the right direction. In his enthusiastically received address to the Parliament on 1 March 2012, President Thein Sein expressed his commitment to ending ethnic conflict, emphasising that he is determined to “end the misunderstanding and mistrust between ethnic groups and the government”. To this effect, he set out a three-step process, which aims to deliver sustainable peace and an opportunity for recovery. The first step would be signing ceasefires in all war-torn areas, followed by negotiations between local authorities and the national government, dealing with cultural, political and socio-economic issues. Finally, changes would be made to the Burmese constitution, to ensure equal rights and respect for all ethnic groups.

Thein Sein’s address, delivered using progressive language and touching upon burning issues which have long been ignored by the government, has raised many hopes. However, we should be cautious not to applaud the government too early: the three-step plan could potentially make the solution of ethnic conflicts easier, but peace is still nowhere to be seen for the Internally Displaced Persons. The ceasefires may be the necessary place to start, but, especially in the light of the Burmese government’s long and shameful tradition of violating truces with ethnic groups, they can only result in sustainable solutions if they involve genuine and inclusive political dialogue. Such talks have been initiated in Karen state, where Thein Sein has met with the leader of the currently banned Karen National Union party – an unprecedented and symbolically very important event, but whose real impact is yet to be seen. Despite the ceasefires and apparent move towards sustainable peaceful solutions, the situation in many states, including Karen and Kachin state, has been highly unstable, as they have been under attack by the Burmese army, regardless of Thein Sein’s declarations and orders.

Without tangible political change, the forced relocation will continue, depriving thousands of Burmese citizens of their basic rights. The ceasefires and peace talks in some of the regions may be a sign of the government’s willingness to end the ethnic conflict. While this should be recognised, the international community needs to put pressure on the Burmese authorities to ensure that Thein Sein’s declarations become reality. With hundreds of thousands of people still living in forced relocation camps, the international enthusiasm for the reforms in Burma appears to be premature. The country might be on the right track to a real change, but it still has a long way to go.

The Oxford Burma Alliance has launched a Displaced But Not Forgotten 365 campaign to raise awareness about the issue. See oxford-burma-alliance.weebly.com for more information. 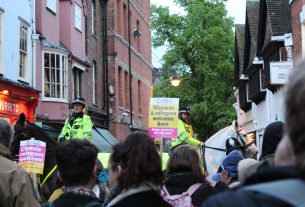