A London rugby club have become embroiled in a dispute with the Rugby Football Union (RFU) over whether they should be allowed to move to Oxford and bring premiership rugby to the city next season.

London Welsh’s current home in Richmond does not meet RFU standards for a top-flight stadium, and instead, the team have played a number of games at the Kassam Stadium this season – including their qualifying victory.

However, the club’s plans to ground-share with football club Oxford United at the stadium failed an audit, putting a permanent move in jeopardy.

A statement from the RFU said: “The independent auditors identified various failures, including not having primacy of tenure at their nominated ground.”

Yet a responding statement from London Welsh said: “If promoted [the club] would share its ground with a club from the FA, in common with other Premiership Clubs (such as London Irish, Sale, Wasps and Saracens).

“It is not clear why an exception made in the case of at least four top flight clubs (a third of the total) might not now be extended to a fifth.”

London Welsh are currently exploring the best route to challenge the decision, which currently safeguards Newcastle’s Premiership status despite the club finishing in bottom place this year.

Bleddyn Phillips, Chairman of the club, said: “We are pursuing all available opportunities to make sure we can take our rightful and deserved place in the Aviva Premiership.”

Most students have been responsive to the plans, although others have been divided on the issue.

Chris Whitehouse, rugby captain at Christ Church, said: “Newcastle have been the worst team in the Premiership this year by far and deserve to be relegated.”

He added: “It would be a fantastic boost to the area to have Premiership rugby so close-by, and I would be surprised if the University didn’t attempt to establish some form of relationship with them.”

St John’s student William Balcombe agreed, saying: “If a team has won promotion from the league then they should be able to be promoted no matter what the club’s situation is.”

He said: “They [Newcastle] have a rich backer and have made a lot of very good signings for next season, so will  most likely bounce straight back up.”

William Whittington said: “Not allowing London Welsh to be promoted makes an entire season of the English Championship irrelevant, as well as not punishing Newcastle for losing the Premiership.”

He added: “Moving premiership rugby to Oxford is a worthy cause, with a student body that would most likely attend home games.”

However, Charlie King, rugby captain at Keble, said: “I don’t think the RFU will admit the appeal that Welsh have submitted because looking at Newcastle’s signings, they seem pretty confident that they’ll be staying up.”

He explained: “If Welsh were to move from London, they would really be starting again as a club.  They would have to put down roots despite having no real links to the local population…a London club with proud Welsh roots playing in Oxford is a pretty odd mix.”

Oxford United fans are strongly opposed to the proposals. The club has been trying to buy the ground off Kassam for some time, and has been unable to, thus leaving them with a large yearly payment to stay in the stadium.

A supporter said: “We fear that what small claim we have to a home at the Kassam Stadium is about to be snatched away from us to the detriment of the our club.”

Wisdom from without: Madeleine Reiss 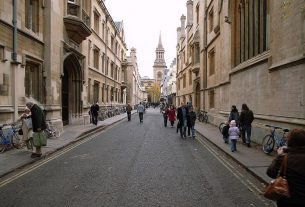