Confess, the sophomore release by Twin Shadow, is a synth-tinged journey back to the 1980s. Dominican-born George Lewis Jr., the man behind the moniker, takes the funk and new wave elements of Prince’s Minneapolis Sound, and with his R&B sensibilities crafts hook-laden songs. Lewis was born in Florida, and his music captures the Sunshine State, whilst channeling the vibrant Brooklyn scene where he now resides. Grizzly Bear’s Chris Taylor, a fellow Brooklynite, produced his debut release, Forget, back in 2010, but for this much anticipated second album Lewis has taken on all responsibilities. The result is a very intimate record, indeed, a confession. Where Forget dealt with the past, Confess is routed firmly in the present. “This album is about being on the road and the way my relationships have changed with people,” Lewis told Pitchfork. “I’m spelling out my reality as it is right now.”

I first heard Twin Shadow on a Blackbird Blackbird mixtape. ‘Slow’, from his debut, was featured, and what struck me most was how densely layered it was. For a solo project, the extent of orchestration is quite remarkable. Confess doesn’t have the same layering, but if anything the result is a bigger and bolder sound. The songwriting is confident and cocksure, and the cover art, where Lewis stands chest puffed, sporting a leather jacket and popped collar, outwardly exudes this. ‘Five Seconds’ is the first single from the album, and the most energetic track. A pounding synth riff drives the song, and it’s not hard to imagine crowd sing-a-longs to the cyclical chorus, ‘Five seconds to your heart/Straight to your heart/I can’t get to your heart.’ It is however, a moment of upbeat respite in what is a much more downtempo and lethargic album elsewhere. ‘You Can Call Me On’ bears a spritely guitar riff that drifts in and out, but the song is much slower. On tracks like this and ‘Beg for the Night’, comparisons can be drawn with some of the quite spacey, bass-driven songs from the Antler’s last release, Burst Apart, such as ‘French Exit’, admittedly with more vigour and a less minimalist construction, but a very similar beat.

Inwardly, Lewis does not come across as confident as the artwork would have you believe. He lays bear his relationship difficulties on Confess, and told Pitchfork in a recent and candid interview, ‘I’m starting to question the importance of truly coexisting with someone, if it’s really healthy at all.’ As the album progresses, the pace slows and the songs become dark and tortured odes to failed relationships. It’s easy to get lost in the synths of ‘Five Seconds’, and miss the failed efforts described to win over a cold-hearted woman (‘There’s no way to get iron.’) On first listen, the album is a catchy and upbeat one, but the lyrics tell quite a different story. ‘The One’ is the strongest track from the first side of the album. The rhythm bears more than a passing resemblance to The Cure’s hit ‘Close to Me’, and it channels Robert Smith’s more morose songwriting (‘I can’t believe sometimes I lost the one who cared.’) This sinking feeling persists on ‘When the Movies’s Over’, where Lewis sings, ‘This time we’re wasting/You come along/I’ll be down like a nightmare’ over a melancholic synth.

It’s the album’s last two tracks that are the highlights on this honest and heart-wrenching album. ‘I Don’t Care’ is an exploration of an unfaithful and deceitful relationship, where forgiveness proves inescapable owing to a quite self-destructive inclination (‘I don’t care, I don’t care/Long as I can dance you ‘round the room while I lie to you’), whilst ‘Be Mine Tonight’ finds Lewis urging a love interest to spend the night with him, exclaiming, ‘And the seconds before the moment you leave/Just let me say this/Be mine tonight.’ It isn’t self-pitying, and it certainly doesn’t seek to lay blame, let alone suggest any one-sided culpability. In doing so, Lewis has created a very powerful album of admirable sincerity. 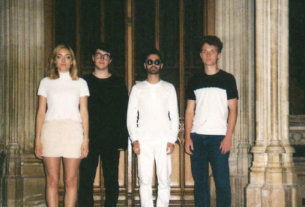