Following a successful season for Somerville College FC, preparation for next season started with a footballing holiday in Holland. Travelling as a squad of fourteen, the JCR third division champions were based in Amsterdam, and had two friendly matches lined up. The itinerary for the trip described the levels of both opponents as “good”. Upon further investigation “good” was found to mean “fourth tier in the Dutch football league system”.

Unfortunately only twelve of the players were able to make appearances, as player-manager Edmund Davison was out of action with knee ligament damage, and Nathaniel Jowitt had a back strain.

Arriving in Volendam with little more than five minutes until kick-off, without a ball with which to warm up and overwhelmed by the excellent facilities, Somerville found themselves a goal down after just eight minutes, as a ball over the top caught the defence standing and goalkeeper Nicholas Shinder was lobbed from the edge of the box. Before the match was able to settle, things got worse for Somerville. An ankle injury to Shinder forced Somerville manager Davison to bring on his only available substitute, David Burgess.

The ‘Ville gradually got more involved in the match, creating a few chances for strikers Waheed Safi and Will Fell, and forcing a number of set pieces deep inside the RKAV half. It wasn’t until midway through the first half that ‘Ville equalised when Fell bundled the ball into the goal from three yards out. Just five minutes later and the big striker was at it again. A through ball from winger Pete Stewart was coolly converted by Fell to give ‘Ville the advantage. Some excellent defending from Will Travis and Joe de Sousa meant that RKAV chances were minimal, whilst the RKAV defence played keep-ball, as you would expect from a continental side. However, just before half-time a poor pass out of the RKAV defence allowed Ralph Turner to break through from the middle of the park and apply a simple lob over the RKAV goalkeeper. It almost got better for Somerville and Turner one minute before half-time when the utility player let a cross drop over his shoulder and fired left-footed volley towards the top corner, forcing the RKAV keeper into an acrobatic tip over the bar. Half time, 3-1.

As both teams tired, the second half was fairly uneventful. Stewart missed three half-chances, but RKAV dominated, only being kept out by the offside flag on two occasions. Eventually RKAV found a way through the Somerville defence, but it was too little too late for the Dutch. As for Somerville, a great way to start their pre-season tour.

Preparation for the second fixture was much better, despite the team coach getting a puncture on the outskirts of Utrecht. With more time to warm up for this match, Somerville started strongly. Pete Stewart was energetic on the right wing, and the team from Oxford had a decent amount of possession and were passing the ball well. Centre midfielder Will Boyer was unlucky to see a long range effort rattle off of the underside of the cross bar following a mazy run, which could have changed the dynamics of this fixture. As it happened, a freak own goal from Ralph Turner meant the ‘Ville would have to come from behind for the second match in a row. Before long, Waheed Safi ghosted in at the far post to finish off a fine team move, but the Dutch side were spurred on by this and retook the lead.

The match developed into an end-to-end affair, as both teams started playing more direct football. ‘Ville had the better chances, the best of which fell to Boyer who beat the offside trap running onto an inch-perfect cross into the penalty area from right back Alex Harding, but lacked composure, poking the shot under the goalkeeper but inches wide of the post. It was down to Safi again to equalise, as some intelligent play from strike-partner Will Fell presented the Afghan with a one-on-one chance which he could not miss. FC de Bilt hit back instantly again, as a free-kick came back of the crossbar and was turned in on the rebound.

For Somerville the second half got worse. FC de Bilt kept the ball incredibly well, and the ‘Ville could not get near them. The only chances Somerville had to put pressure on came in the form of set pieces, which were squandered. In a frantic five minute spell, de Bilt hit two shots in past David Burgess, as the ‘Ville lost concentration. The whole team was struggling, having been outplayed and outrun. However, Boyer scored a cheeky back-heel late on, which was nothing more than a consolation goal after brilliant play down the right flank from Fell and Harding. Somerville will not be disappointed with this result, but without wasted chances and a lack of concentration could have done better. 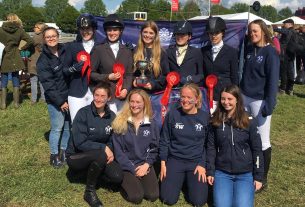 Unrivalled success for OUEC this season