In an interview with Spinner earlier this year, Gaslight Anthem lead singer Brian Fallon described the creative process of the band’s new albums thus: “I didn’t know what was going to happen. After American Slang, after The ’59 Sound, I was like, ‘What am I gonna do?”. What he did do (as he goes on to say), was write “45” the lead single from Handwritten and one of the summer’s biggest and best rock offerings. But the album itself suggests a band struggling to recapture some inspiration.

The Gaslight Anthem have always stuck to their guns; each of their first three albums provided propulsive, meat-and-potatoes rock ballads by the bucketload, and songs about girls, good times, and tragic love have seen them through so far. But by now, a couple of dozen New Jersey punk intense-athons down the road, you start to wish that Fallon and co would vary the act a bit.

Which isn’t to say that Handwritten isn’t good. It is good, and at times it’s great. Aside from “45” (which is the obvious standout track), “Keepsake” and “Too Much Blood” shine in an album which is full to the brim with scorching riffs and yearning lyrics.  When “Where’d you get them scars?/ How blue is your heart?” (and the armada of similarly Anthemic lines) play through your headphones it’s hard not to feel some sort of chill down your spine. Handwritten is the perfect summer album, one that comforts and encourages, and one that sounds good in the sun.

But it all sounds very familiar, or at least it will do to anyone who knows the group’s earlier work. And whereas American Slang displayed a band who were growing and expanding on the blueprint that Sink or Swim provided in 2007, Handwritten feels somewhat stagnant. For an album which is based on cascading drums and soaring guitars, it’s strikingly short of momentum, and the constantly high level of intensity (lyrically and sonically) is ultimately a drawback. The Gaslight Anthem have always been good at doing what they do, but after forty minutes of unremitting rock heartbreakers, you start to wish they’d do something else.

Still, it is a good album. Fans of the band will find little to complain about at the prospect of eleven additions to the group’s formidable oeuvre. The uninitiated won’t be disappointed, but they would be well advised to start with The ’59 Sound instead.

Marching away from the Black Parade 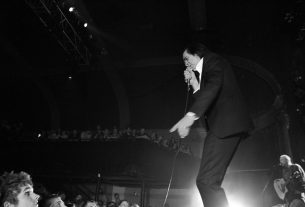