Agi Mdumulla, 26, and Sam Cotton, 25, who together form Agi&Sam, are the rising stars behind the regeneration of male fashion. The dynamic pair hit the fashion world with their bold colours and shocking prints, drawing inspiration from just about everything from pop culture to ethnic prints. Their highly acclaimed autumn / winter 2012 collection signalled the welcome end to functional menswear; no longer will men have to suffer in silence, quelled by mute tones, undefined cuts and antiquated ideas of what menswear is. Their witty prints, distinctive cuts and colourful regeneration of outdated materials, signify menswear with a sense of humour. Men can finally have fun with fashion!

The pair always showed signs of undefined potential and ambition; initially meeting during their elusive internships at Alexander McQueen. But when it was their turn to enter the world of work for real, they didn’t settle down and accept the lack of work in larger globally recognized brands, but decided to create their niche market with the help of significant fashion figures such as Fashion East’s Lulu Kennedy. They were even offered advice from Sir Paul Smith himself about how to create a collection, which has proven to be a stumbling block for this pair who claim that their over spilling creativity can hamper their coherence. 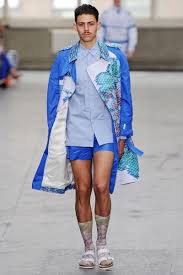 Despite their success, their unassuming backgrounds make their recent rise to fame even more impressive. Sam hails from a rural farm near Stratford upon Avon whilst Agi grew up in Yorkshire, both far from the glamour and glittering lights of London. And for once it wasn’t a degree from Central St. Martins that secured their passage to success; Sam trained in illustration, whilst Agi received his BA in fashion design at Manchester Metropolitan University. Even their studio lacks the polish and veneer of a glossy fashion house. It has been described as a teenager’s bedroom with clothes lying dispersed across the floor, with two sewing machines positioned in the corner of the room.

They face a certain dilemma between the boldness of the prints and the cutting edge structure of the clothes themselves. Whilst the prints are extremely loud, the duo feels that the cut of clothes needs to be wearable, whilst not being boring. Perhaps a compromise for designers who made an entire collection from recycled bottles; initially a cost effective method to avoid the more expensive forms of garment production, which later bread into their desire to create revolutionary, cost efficient and eco-friendly fashion. It is however no wonder that they struggle to contain their collections when the inspiration for their autumn/winter collection alone stemmed from quantum physics, tequila, 2001: A Space Odyssey, and ideas of evolution and the future. They however managed to channel these ideas down into distinctly wearable printed shirts, tailored coats and sporty parkas, unified by their trademark use of extreme colour.

Their success also stems from their connection to a distinctly London ethos. Their vibrant prints fit in perfectly with the London multiculturalism and liberality, where pushing the boundaries is the norm. And they have emerged just at the right time; taking centre stage in the revival of men’s fashion after London hosted its first full menswear event in June; placing menswear on a par with its female counterparts. The duo put the resurgence of male fashion down to a new found “metrosexuality” where an interest in fashion is no longer a taboo for men. Fashion is no longer merely for the rich or the dandies, but for the modern urban man.