St Hugh’s has come under fire this week for the “skanky” standard of its accommodation. Students were greeted with graffiti, broken furniture and cold showers on their return to college last week.

One student even came back to find a swastika carved into his wall by the previous occupant.

There has been a flood of complaints about the Wolfson building at St Hugh’s, with students forced to request a number of things to be replaced or repaired.

Walls of entire staircases in Wolfson have been chipped away at, dented into and graffitied; students are forced to kneel in the showers as they are too tall otherwise; and there aren’t enough sockets in the kitchens to run basic equipment at the same time.

Laurie Blackman, a second year historian who has reported numerous problems with his room, said: “I was incredibly disappointed to discover my room was adorned with graffiti as charming as a swastika and a cheerful ‘AIDS’ or two gouged into the walls.”

He described the scrawls as “aesthetically hideous”, and said the problem wasn’t just the defacement, but that it was so offensive.

Blackman conceded that the pinboard with the swastika was removed once he reported it to the college, but said he had “no right to find [his] room in that condition in the first place.”

Vicki Stott, Bursar at St Hugh’s, said she could “find no record of the graffiti you mention”. Although documents seen by the Oxford Student show the complaint was made, and dealt with by college maintenance.

In forms submitted by Blackman to the college, he had to request replacement curtains, a new mattress, and a lampshade for his main light. In addition, his bedside light required repair as the switch had been ripped off, and the left side of his desk was “only notionally attached to the rest of the desk”.

She said: “The graffiti and damage to rooms…is usually done by the summer schools that St Hugh’s accommodates during July and August.

“We are dealing with these complaints presently and repair of this vandalism will be charged to the relevant culprits.”

Problems were also noted with the standard of the bathrooms. Blackman said that if he kneels on his knees in the shower, he still touches the ceiling, and another historian living in Wolfson agreed, adding this problem affected a number of students.

He said: “We’ve got sinks in our rooms, but aside from that, have two toilets and one shower between 8.

“The shower doesn’t work, and has run intermittently ice cold, despite an earlier maintenance attempt to fix it. He added that everyone is “really fucked off” about the problems.

Blackman agreed, saying: “The showers were cold when we arrived, and hadn’t been cleaned.

In the same bathrooms, students found loose toilet door hinges, and toilet doors with no locks when they returned from vacation.

However, Polakova was quick to defend the college, saying: “There will always be issues with one or another part of College. St Hugh’s is not wealthy enough to be able to repair all pending issues simulteneously, so the Estates Manager must prioritise.

“The hot water issue is related to the main Hugh’s boiler breaking just before term started, which cost tens of thousands of pounds to replace. Students have been made aware of this and College are doing the best they can to get such issues sorted directly.”

Opinions of the kitchens in Wolfson fared no better. They were described as “just kind of skanky really” by a second year who did not wish to be named.

Despite students requesting a multiplug to allow them to use the oven, toaster and kettle at once, they “were told it was not something that college can provide”.

Students living in the building are annoyed at the disparity between the accommodation facilities throughout the college despite being charged the same for the “privilege” of living in Wolfson as those who live in RTB and Maplethorpe (which offer for the most part, en suite showers and loos).”

Vicki Stott, St Hugh’s Bursar, said: “We are currently drawing up a long term estates plan for the College. The Wolfson building is on the agenda for a comprehensive refurbishment, including upgrading bedrooms to ensuite facilities.

“We make every effort to keep the College buildings in a good state of repair. Unfortunately, some wear and tear is inevitable when living in old buildings, but I take seriously any reports of offensive graffiti and would urge students to report these through the maintenance request system so that we can deal with both the graffiti and its perpetrators as quickly as possible.”

Accommodation is randomly allocated in St Hughs by an alphabetic ballot, with students who receive a bad room one year supposedly getting a better one the next. 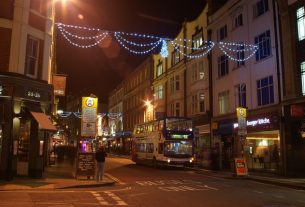