Oxford has been named the UK’s best, and the world’s joint-second best, University in the latest Times Higher Education (THE) World University Rankings.

Stanford University came joint second with Oxford, just ahead of Harvard in fourth.

Both were beaten to the top-spot by the California Institute of Technology (usually known as Caltech). Despite having a body of only around 2,000 students, Caltech has seen 31 of its students go on to become Nobel laureates. Home to NASA’s jet propulsion laboratories; Caltech also topped the table last year and came a close second to Harvard the year before.

Oxford’s success comes in the wake of disappointment in this year’s QS global rankings where, coming fifth, it was outperformed by both Cambridge (2nd) and UCL (4th).

Oxford’s department of medicine, in particular, was praised by THE, which named it the best in the world for the second year running. Oxford’s medical rivals Harvard, Cambridge and Johns Hopkins were ranked 2nd, 3rd and 4th respectively.

Despite coming only seventh in the overall global rankings, Cambridge still achieved a slightly higher score for the quality of its teaching than Oxford.

Oxford’s worst performing subject area was Engineering and Technology, where it came eleventh, below both UCL (10th) and Cambridge (5th).

Ali Hazrati, a third year Classics and Persian student at Wadham said “I don’t put too much credence into these rankings, they seem quite arbitrary to me”

Oxford’s Vice-Chancellor, Professor Andrew Hamilton, said: “We are delighted with this indicator of Oxford’s continued commitment to excellence in all areas of activity. World-class excellence cannot survive without proper funding, so we will continue to look to friends and alumni for support, as well as to argue for strong public funding of research and higher education.

“It is particularly pleasing to have our world-leading medical science recognised. From fundamental science to treating patients, Oxford medicine is changing scientific understanding and changing human health – both locally, through our partnership with the Oxford University Hospitals Trust, and all over the world.”

The latest table marks the third consecutive year in which THE has produced a ranking of world universities. The table began in 2010 when THE split from its then partner QS, deciding instead to employ its own methodology to the rankings. 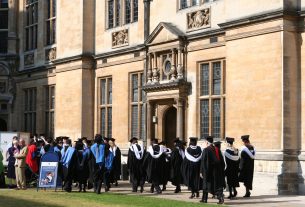 …so what did you do this summer?