‘Tis bitter cold and I am sick at Hertford: Madi Maxwell-Libby attends a Cheek by Jowl workshop on Hamlet

Of all the challenges acting and directing presents, classical monologues are perhaps the most difficult. How do I speak the lines so they don’t sound robotic but respect the form at the same time? How can I make such allusive language seem real? How can I say ‘to be or not to be’ without the audience cringing? These are just some of the problems participants in Cheek By Jowl’s Hamlet workshop raised with its associate director, Owen Horsely.

Beginning the workshop with a few simple movement exercises, Horsely sit us down and discusses the challenges of speaking verse, and approaches towards it. The most important thing, he explains, is to know to whom you are talking. ‘It sounds simple’, he says, ‘but it should be the first question you ask. Not what am I saying, but who I’m saying it to’. Language exists to communicate something, either to others or yourself, and it is finding this reason behind the speech that is key. The reason, says Horsely, is to change something: ‘We don’t speak to describe feelings, we speak to make someone understand how we’re feeling. All text is to change the person we’re talking to. This may not [always] be true’, he adds, ‘but it might be useful in bringing the text alive and making it mean something’.  One technique Horsely suggests is based on the idea that conflict is at the centre of all drama – that is, saying ‘no’. Before every line, you need to find ‘the enabling no’, imagining the text resisting you and making you find the conflict. This is the technique Horsely uses when scenes go flat, often in the later stages of rehearsal when the actors get too comfortable with the text.

Ultimately, though, ‘the words are not enough’, because ‘the experience is always bigger than the words’. Horsely explains the pyramid structure of drama: the story is the baseline, the text is the medium, and at the tip is the experience. Often, he says, characters speak because in fact they can’t articulate what they’re feeling: ‘it’s certainly the reason Hamlet speaks so much. He’s trying to articulate something that’s essentially unutterable. The images and metaphors he uses are because he’s trying to find words for an experience that is bigger than words.’ Horsely also disagrees with the common notion that acting is all about what’s inside. In fact, he says, it’s the reverse. Rather than trying to generate feeling from the inside out, an actor needs to find tangible ways to connect with the outside world. The internal feelings will then come naturally.

But what about the form of the verse itself? Horsely explains that the regularity of verse is actually there to help us. He suggests reading a speech in the monotone iambic fashion, making it very ‘regular’, in order to see which words jar with the rhythm and need to be made irregular – rather than working out the stresses pre-emptively. And, he stresses, the worry about making the play ‘real’ in the modern sense doesn’t help when looking at classical texts. Instead, productions should focus on ‘the journey to be made towards the play, rather than bringing the text to you. It’s about creating a new sense of real. 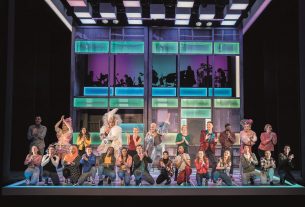