JCRs across Oxford have been debating whether to fund their members’ travel to demonstrations against government austerity later this term.

Keble’s JCR and Wadham’s SU both voted to support students intending to join the National Union of Students and Trade Union Congress protests in London later this year.

The NUS protest, which is planned for 21st November and has been given the title “#demo2012: Educate, Employ, Empower”, seeks to oppose the government’s austerity measures, the higher fees it has introduced and the record levels of student debt students are faced with.

Keble Vice-President Luka Boeskens, who proposed the NUS motion, said: “This is what our JCR was made for. We need to consider who we will alienate ourselves from if we do not consider this a just cause. It would send the message that we have lost the ability to express ourselves.”

Seconder of the motion James Kleinfeld added: “This motion sends a very clear message. I want all those Daily Mail columnists scouring over our JCR minutes to hear us loud and clear that we at Oxford care for more than just Her Royal Majesty and grand pianos, that we believe that education should be a right, not a privilege.”

Opinion at the meeting in Keble was far from unanimous with one JCR member describing the NUS demonstration as “an absolute joke” and said that it would “change nothing”.

Another member defended it by saying: “You need to get to the demonstration. It doesn’t fucking matter if Cameron or Osborne don’t take any notice, but at least you’re there.”

While it voted in favour of releasing funds to assist its members in travelling to the demonstration, it voted against mandating Keble JCR representatives at OUSU to vote in favour of motions expressing support for #demo2012 at a council meeting to be held in the coming weeks.

“It’s a shame, but it is to be expected,” said James Kleinfeld at the end of the meeting. “It would be fool-hardy to expect a politically-engaged JCR at the first meeting. The vote represented about thirty votes in a room of about seventy students, in a college of over four hundred undergraduates.”

Similar motions dealing with supporting the NUS demonstration which were heard at Merton JCR’s meeting yesterday were both voted down. Peter Berry, who opposed the motions, said: “Merton JCR is there to represent all Merton students, and should not be a forum for a group of people to voice their party-political views. The motion from OUSU was very specifically anti-Tory and anti-government, a position which does not reflect the diversity of opinion within Merton JCR.”

Meanwhile, Wadham’s Student Union passed a motion to support students intending to join the Trade Union Congress protest in London on 20th October, which also aims to challenge austerity policies. As a result, £10 for every student attending will be donated to Oxford Trade Council, who are funding free travel to the protest.

SU Vice-President Alex Cibulskis said: “I am very pleased to see our SU discuss motions which move beyond the College to look at current national issues, and to support those who wish to take a stance on those issues where we as a body feel it is appropriate.”

“The motion will hopefully encourage future lively debate in SU meetings on a wide range of other issues as well. Passing it means that it will be very easy for anyone from Wadham who wishes to march at the TUC demonstration, along with students from across the university.”

OUSU had previously voted against a motion of support for the TUC protest in its first week council meeting, which included plans to hire coaches, promoting and publicising the demonstration, holding discussions and banner-making meetings.

The motion’s proposer Nathan Akehurst said: “When I proposed the motion at OUSU Council, one criticism was that it was ‘divisive’”.

The Lincoln College OUSU rep added: “I think this holds no water – every decision an elected body makes will be by nature divisive – and too long have student unions used the ethic of ‘representing all students’ to shy away from making important decisions, with no idea of how representative democracy works.”

“The higher education system is under attack – with cuts, marketisation and privatisation, and the only way this can be stopped is by students standing up to defend their education, alongside academics and education workers. This motion passing would have been a symbolic victory, a commitment to a wider vision of an inclusive education and general solidarity.”

OUSU is to vote on a motion of support for the 21st November NUS protest within weeks. 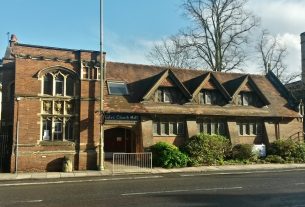