Written in 2009, Orphans is very current: it explores violence amongst the comfort of a domestic ‘John Lewis’ setting. As the audience wanders in, they pass over the threshold of Helen and Danny’s house, sidestepping shoes and moving around the dining table before being seated. Michael Bublé is playing on the speakers and Helen and Danny share a kiss. It is quite hard to know where the ‘warm up’ ends and the play actually begins due of the relaxed attitude of the actors, but I found that the audience instinctively hushed when the time came. That was the moment of calm before the storm. Helen’s brother Liam strides to the centre of the stage – wearing a hoody, trackies, and a t-shirt soaked with drying blood – and starts to ramble, and swear, then ramble, and swear a lot more.

The dialogue of Dennis Kelly’s play is in many ways stilted and slow, but to the effect of heightening the tension in a play that has already put the audience on the edge of their seats – disbelief is followed by a sense of inevitability. This is not to say that the story is in any way predictable – Kelly throws in several twists to the plot which keep you continually wary of your own assumptions and deftly shifts the audience’s sympathy from character to character. He said in an interview shortly before the play premiered: ‘I always want my plays to have tension, whether the audience hates it or loves it [the play] is up to them, but I never want them to be bored.’ With Orphans there is no possibility of boredom, as the story pulls you into the moral dilemmas the three lead characters face with alarming speed, and does not allow withdrawal from this world for quite some time afterward.

As a trio the actors are extremely convincing; they have no trouble holding the audience captive despite their small number and the unchanging set. Alice Porter’s Helen is both stubbornly protective of her brother (her only remaining blood-relation) and yet also deeply questioning of everything belonging to her ‘new’ life. Every facial expression conveys her complex emotions and morals and Porter manages to expertly manipulate both her husband and the audience. The weak link of the three is Liam Steward-George’s Danny; he often seemed unable to alter the emotion of his voice and body language to suit the progression of the plot, though this is perhaps partially because his character has the most unforgiving lines. Steward-George’s Danny, the most morally conventional character, was also the blandest to watch. The final member of the trio is David Shields who definitively steals the show, playing the catalytic character of Liam. Initially naïve and childlike, stammering out his story of finding a boy hurt and alone, as the play progresses Liam and his story disintegrate as he simultaneously becomes more confident and unashamed in his speech.

Orphans is shocking and startlingly real, but most of all – ‘tense, isn’t it?’ with these words, bookended by a couple of expletives, Liam provokes one of the few laughs in a lighter moment of a play. Orphans forces you to question what and who is really evil, even if an answer is never proffered.

Orphans plays at the Keble O’Reilly until Saturday. 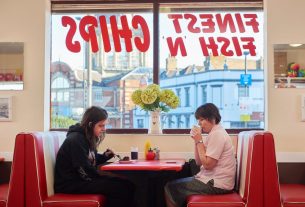 Review: Days of the Bagnold Summer

The Madness of Mathematics

Easy riding for Gosling in The Place Beyond the Pines