As the piano warmed up the audience with a little light jazz, I looked around the small auditorium and wondered whether the atmosphere would be impaired by the tightness of the space, and whether the piano would dominate the singing. But, as soon as the cellos struck up for the first song – balancing perfectly with the volume of the singer’s voice, I knew that I was in for a treat.

This chamber musical, by Jason Robert Brown, tells a simple love story with only two characters: Cathy (Heather Young) and Jamie (Nick Barstow). While Jamie tells the story of the couple’s five years together from beginning to end, Cathy tells it in reverse. From Cathy’s opening number ‘I’m Still Hurting’ and onwards, Young’s vocal control and power combine with marvellous acting abilities. She sings about the death of the relationship and, as the song ends, the music moves straight into Jamie’s joy at having found love. This jarring of tone runs throughout the musical, but it is interesting and it draws the show away from being a straightforward bell-curve love affair. Young coped with these quick changes of mood excellently.

Similarly Barstow’s Jamie is as impressive. His acting and singing was of high quality and he used his powerful voice to good effect, though a couple of the higher notes slightly missed their mark. Barstow uses personal physicality – his hands and his face – rather than the wider space of the stage, but still maintains an impressive energy; at one point he slides to his knees, jazz hands splayed out, hit by the euphoria of love. It is difficult to sing ‘pzazz’ful show tunes on one’s own in the middle of the stage, but the pace is never dropped.

Musically, the songs are miniature pastiches of musical staples, a catchy combination of Sondheim and Disney. Songs from musicals are generally snapshots, expansions of the significant moments in the characters’ stories; this piece expands on that idea – it is purely snapshots – only the significant moments – through which the audience pieces together a rounded story.

The neat little trick of telling the stories in opposite directions means that the audience is continually in suspense awaiting the moment when they crossover: the big duet. This, like the rest of the show, is wonderfully directed by Kezia Lock and Sam Newhouse.

The stage area is divided into sections by props and lights: living room, office, bedroom. Pools of light illuminate the focal character, while the other singer interacts silently. At times this made the production seem a little static arguably intentionally reflects the snapshot nature of the piece.

In the music there is schmaltz and saccharine, but it is tempered by some real ingenuity, some lyrical flashes of wit and some unexpected musical progressions. The musicians, each one audible and exposed by the paucity of players, did not miss a note and Toby Huelin, pianist and musical director, alternated between playing the piano and keeping the ensemble in time. Very little about this musical was sub-par, but its real strength was Heather Young. She was not just good, but flawless; the superlative element of this quite extraordinary production. 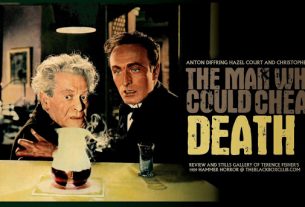 The Man Who Could Cheat Death: ‘A campy exploration of immortality’