So. Beats. It’s a strange one, this – a disconcerting picture of a cat, two women who over-enunciate and some heavy footsteps to hammer home what ‘Beats’ are. Two things stand out: firstly Tom Edkins (who is not Alex Darby!) has put a great deal of effort into showcasing nuanced acting, and, secondly, the setting, Modern Art Oxford, has simultaneously been allowed to speak for itself. Unfortunately, the acting isn’t always as nuanced as the camera would like. The rub of a thumbnail across the handle of the wheelchair is touching when seen in close-up, but the rest of that character’s awkward arm movements seem too large in comparison.

Perhaps the most telling problem with this trailer is how little it gives up about its plot, characters and cast. My helpful editor tends to put cast names in brackets after the character’s names, but I had no idea what the characters were called until I sought out the two ‘making of’ videos. Yes, this play effectively has four trailers: “Pretentiousness gone mad!” The blonde one is ‘Cecilia’ (Phoebe Hames), the brunette ‘Jean’ (Lauren Magee). As for their relationship, well, from the ‘teaser’ trailer it could be lovers, friends, carer and patient, cousins, sisters.  The vagueness is off-putting – it’s near impossible to engage in their closeness when we have no explanation of what lies behind it. In fact, from the self-conscious enunciation to the echo to the striving to say something about Art (capital letter, firm ‘t’) every moment of this trailer (sorry, teaser) is deliberately stark and discomforting, but crucially, never challenging. The viewer is not invited to respond, merely to sit and be lectured about art in the abstract. I refer you to the quote above.

Beats plays at the Simpkins-Lee Theatre (LMH) from Wednesday to Saturday of 6th Week.

Bronzing blues: why tanning is causing us troubles 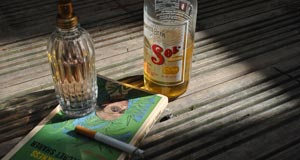 This is the End