As a growing proportion of the population reach old age, nature’s arsenal is being tested. Where as once, one might have expected to perish at the hands of famine, plague, or what these days may be considered an innocuous infection, it is now the protracted suffering of diseases such as Parkinson’s, Alzheimer’s, and cancer that awaits a great many of us. A punishment for longevity, perhaps?

Despite this gloomy outlook on the maledictions of modernity, progress is certainly being made. In addition to our ever-increasing knowledge of the biochemical and genetic mechanisms that underpin these diseases, the way in which we consider and implement diagnostic medicine is set to be revolutionised.

Parkinson’s disease is a largely idiopathic neurodegenerative disorder that sees a steady decline in those faculties many would consider most fundamental: speech, movement and even swallowing. These symptoms are induced by a reduction in cerebral dopamine levels that arises from the death of nerve cells in a region of the mid-brain known as the substantia nigra. Depletion of dopamine, a neurotransmitter with an intimate association with motor system regulation, is responsible for many of the characteristic expressions of the disease including tremor, muscular rigidity, and bradykinesia (a slowness of movement). The disease is thought to affect 6.3 million people worldwide, 127,000 of whom live in the UK. Although incurable, the disease often has little affect on the lifespans of its sufferers but can put enormous strain on the body and confers to many debilitating disability. The prognosis for the affected is often dependent on the condition’s progression at the point of diagnosis, for it is in the early stages of the disease that the motor symptoms advance most aggressively. Left untreated, patients are likely to be left severely disabled after less than ten years of disease duration (Poewe, 2006).

A number of drugs including levodopa, bromocriptine, and selegiline are available to manage the symptoms of the disease but their varying durations of effectiveness and complex side-affects complicate treatment. ‘Being able to diagnose Parkinson’s disease as early as possible enables clinicians to optimize the prescribed treatment and ultimately improve the quality of life of Parkinson’s disease subjects’, write Max Little and Athanasios Tsanas, the visionaries behind an innovative approach to both diagnosing and monitoring the condition in patients.

Currently, diagnosis of the disease is performed by a twenty-minute neurological test that is expensive (a single test costing $300), requires the presence of an expert clinician and, by medical testing standards, is fairly subjective. Being without ‘biomarkers’, the use of, for example, a blood test as a diagnostic tool is out of the question. Upon autopsy, a diagnosis may be confirmed by histopathology of the substantia nigra, where pathological characteristics of Parkinson’s disease, such as the presence of Lewy bodies and neuronal loss (inferred by a reduction in melanin pigmentation), may be detected. Obviously, diagnosis upon death is of little use to the patient.

What Max Little and Athanasios Tsanas of Oxford University’s Department of Physics and The Oxford Centre for Industrial and Applied Mathematics respectively have shown is the potential for audio cues to be used as indicators of both the disease and of its progression. Irregular vocal fold tremors in sufferers present a characteristic ‘marker’ for Parkinson’s that offers an objective measure of disease severity. This application is based on work dating from 2010, published in the Royal Society Journal Interface, through a collaborative effort between scientists at Oxford and the University of Colorado, which showed that algorithms of their own design were able to assess the case severity of 6000 audio recordings from 42 sufferers with an accuracy that rivalled those made by clinicians.

‘That [Parkinson’s disease (PD)] leads to speech performance degradation has been known at least since the 1960s’, write the duo in a recent report. ‘Speech requires exquisite co-ordination of all the vocal muscles, co-ordination which may often be severely affected by neurological disorders such as PD. Interestingly, speech degradation may be one of the earliest indicators of PD, with symptoms being detectable up to five years prior to clinical diagnosis’. The development of ‘speech signal processing algorithms’ aim to characterise symptomatic patterns in amplitude and frequency deviation as well as increased signal to noise ratio. Such characterisation would allow for the generation of an objective, ‘clinical metric’ that serves to quantify symptom severity upon a continuum that ranges from the unaffected to the most severe of cases using nothing but voice signals.

It was announced at the annual Edinburgh TED conference in June that Little’s student, Athanasios Tsanas, had shown the test to be 98.5% effective when collecting speech signals in an acoustically controlled environment (sound-treated booth where there is minimal interference). Moreover, they have found that clinically valid conclusions may be drawn even when speech signals are collected over mobile phone networks. It is thus possible for the test to be self-administered from the comfort of one’s own home, using only a telephone. Telemonitoring such as this does not require staff to administer the test, in addition to being high-speed, ultra-low cost and massively scalable. Testing in this way negates the logistical and financial issues associated with transporting the elderly and severely disabled to and from clinics in order to monitor the progression of the disease, whilst facilitating high-frequency monitoring and even allowing for population-wide screening.

The researchers also acknowledge the potential for more advanced condition monitoring through the coupling of such technology with the processing power of the ubiquitous smartphone. The Oxford duo’s report discusses how ‘it is possible to integrate additional information from other standard, built-in, non-invasive sensors (such as accelerometers and GPS) to further improve the quality of symptom tracking using downloadable ‘smartphone apps’. They also postulate that the collection of large datasets may enable the application of such approaches to other chronic or progressive diseases including Huntington’s disease and Lou Gehrig’s disease.

The report ends with the promising statement, ‘telemonitoring such as this appears to be extremely promising, and has the potential to revolutionize healthcare by facilitating fast, frequent, and remote assessment of medical conditions.’ Perhaps this work signals the dawning of a new era in medical science, where one’s doctor is rendered portable.

The scientist of politics 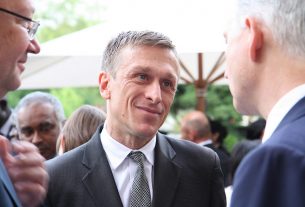