Titus Andronicus is performed seemingly termly at Oxford and no wonder: it is a mad, violent, blood and vengeance-filled play. But this overwhelming popularity brings with it the challenge of innovation and in this term’s offering, director Richard Elliott has decided to relocate the play to 1968 in order, he explains, to place the Roman value system of murder and betrayal in some kind of equivalent, but relatable context. Thus it becomes a clash between middle-class establishment types and radicals, students, charismatics. And Elliott promises that the production will not shy away from the violent element.

Relocation is a much-debated topic, but in the case of Shakespeare it is a difficult, though not insurmountable, task to deliver the original lines convincingly in the radically new setting. All the cast members whose performances I saw did justice to the script and acted with good projection and clarity. Aaron, played by Andrew Laithwaite, had a sneery and malice-filled voice; he sounded very much like a villain. This sense of villainy is echoed by Katie McGunagle’s Tamora and a dialogue between the pair, standing very close and touching various parts of each other, had an intense physicality. Another scene, with Chiron (Anirudh Mandagere) and Demetrius (Matt Broomfield) was great as the two brothers acted out a convincing fraternal spat – one brother annoying and the other annoyed. Already the cast had a very firm grip on lines and had imbued them with the requisite expression and intonation. They did a good job unpacking the dense, unfamiliar complexity of Shakespeare’s verse.

The production will be performed in the English faculty basement, which is a stroke of insight: for once, the drab grey concrete slabs from the 1960s that intersperse the more refined architecture of the city will be put to some kind of aesthetic use. The basement contains a balcony, around which much of the action will take place, and use of spotlights will highlight the ‘age of Jimi Hendrix and John Lennon’ that the play is intending to reflect.

It looks like the show will be very good. But I am still to be wholly convinced by the relocation: there seems to be a clash. The move to the ‘60s is to make the violent Roman value system seem less ridiculous and more relatable, but there is a distinct lack of realism in the acting, due in part to the script, of course. The over-emphasis of the villainous qualities of some of the characters seems to undermine the new setting, but this may be worked out by the time the show is performed. All in all, the strength of the actors is what carries it and it looks set to be an exciting evening with touches of Tarantino enhancing Shakespeare’s brutal tale.

Titus Andronicus plays at the English Faculty until Saturday.

Jerusalem: “a carnival of sensory delights” 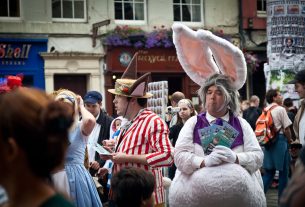 Oxford in Edinburgh: Your guide to the University at the 2018 Fringe