Bryan Cranston. It’s a name you’re probably becoming increasingly familiar with. Many people would immediately recognise Cranston for his trademark role as Hal, the afflicted father-of-four in Fox Broadcasting hit Malcolm in the Middle. Known for running around frantically, agonising over the antics of his delinquent sons, often in tighty-wighties, Cranston’s role in Malcolm saw him labelled as a safe, stable supporting actor – he demonstrated his ability to play a funny and earnest character, but little fuss was made of him, and few pundits regarded it as a markedly significant role.

In the years since Malcolm’s cancellation, its various stars have dispersed in various directions. As the omnipresent narrator put it in Seth MacFarlane’s Ted, “No matter how big a splash you make in this world, whether you’re Corey Feldman, Frankie Muniz, Justin Bieber or a talking teddy bear, eventually, nobody gives a shit.” This is a little harsh on Muniz (Malcolm), who has since gone on to star in films, produce music and even reach some acclaim through race car driving, but it does represent a harsh truth. Malcolm, for all its glory, is now a relic of wondrously mundane afternoons in the early 00’s, preserved through repeats on 5*, but ultimately a thing of the past. Whilst numerous members of its talented cast are still pursuing careers in acting, for the most part they’ve long since departed the radar, for UK audiences at least.

Hal, however, is now right in the centre of it.

He was present on the fringes for many years after the end of Malcolm, surfacing for bit-parts in decent movies such as indie-hit Little Miss Sunshine and a couple of episodes of How I Met Your Mother, but sticking to his remit of the supporting guy, never really stealing the show. The moment for his mutiny of the lead role was 2008 when he landed the part of Walter White in AMC cult-favourite Breaking Bad.

For those of you who’ve seen it, you’ll be aware of Cranston’s panache – the development over 5 series traces the maturation not only of his character but also his of his own performance as an actor. In episode one of series one Cranston is running round in tighty-wighties in a familiar fashion, by series three he’s a changed man: by series five he’s virtually unrecognisable.

It’s not only Cranston who’s benefited of the back of the AMC success. Jesse Plemons, who joined the BB cast for series 5 is now to be seen in Paul Thomas Anderson’s The Master, demonstrating the golden ticket status of a role in Vince Gilligan’s hit show, and Aaron Paul, who is at once hilarious and heartfelt as tearaway Jesse Pinkman, has just landed a role in the 2014 Need for Speed movie. Since virtually every performance in the show is stand out, it’s difficult to imagine a future without Anna Gunn, RJ Mitte, Dean Norris and Betsy Brandt as household names. Bob Odenkirk now has his foot in the door of a serious acting career and did I mention Giancarlo Esposito? Despite previous roles such as FBI agent Jack Baer in The Usual Suspects he’s hardly a familiar name for British audiences. Hopefully his masterful performance as Gustavus Fring should rectify that.

As much as the performances dazzle, the backbone of the show is undoubtedly Vince Gilligan’s writing. It’s a show with big themes: the script is littered with very real ethical quandaries and the roles of pride and honour in modern America are thoroughly examined. Despite this, it never feels preachy. Perhaps what maintains the show’s unpredictability is that it is not led by a moral agenda, but instead does away with traditional hero-villain dichotomies to present an ethical situation that resembles a sort of scaled-up reality, or frequently a nightmare.

The result is possibly the greatest drama to hit our TV (or more likely laptop) screens for a long while. It’s launched or re-launched the careers of some fantastic acting talent, so why not head down to a cinema near you and catch Argo or The Master to see why?

The End of Celluloid Film? 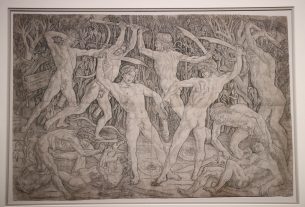 Artistic feuds are not a novel phenomenon