George Osborne’s announcement last week that the planned 3p a litre rise in fuel duty will be cancelled for 2013 highlighted just how dependent Britain is on non-renewal energy. Our reliance on petrol is unhealthy and unsustainable. But how do we tackle this? The last Labour government sent out some positive signals, as augmented duties caused costs to rise at the petrol pumps. But the government’s announcement on Wednesday marked a significant step in the other direction. Was this such a mistake? And what is the way forward as far as fuel duty is concerned?

The first thing to appreciate is that the government-induced increase of petrol prices draws a concerning parallel with the poll tax. The increase in the prices is the same for everyone in real terms, in the same way a flat tax applies equally to everyone regardless of income. But as a proportion of their income the poorest are hit harder than their wealthier peers when fuel duty increases. The politicians who implement these measures barely feel the financial effects, so it does smack slightly of condescending paternalism when well-off rulers take such measures, supposedly for the ‘good of society’.

But wealth disparity is a fact of our society, and one in which governments will always be complicit so long as they seek to directly affect prices. And global warming is a pressing issue that needs addressing in the present, not in an egalitarian Utopia. The disproportionate impact felt at the bottom is a necessary means to the end of reducing society’s carbon footprint and decreasing our reliance on non-renewable energy. This is unfortunate, but necessary.

But is only legitimate to raise the cost of fuel if other measures are taken to ensure global warming is tackled by the whole of society, not just by those who are financially forced to face up to it at the bottom. People on low incomes were hit really badly by the rising cost of fuel under Labour and become incensed with the government, while the middle classes just got mildly pissed off. And moreover, with the electorate addicted to petrol financial measures can only fail to fundamentally change society’s attitude towards fuel and the environment. It became politically infeasible to keep increasing the cost of petrol – inevitably, the government this week froze duties, and in so doing kicked global warming into the long grass.

What is needed then is a sea-change in society’s whole approach to energy and fuel, so as the whole of society and not just those at the bottom make a move­ away from petrol. Green planning has already kicked off in the private sector, where green industry has consistently grown throughout the recession, and is predicted to have grown by 40% between 2007 and 2014. The state must help translate this approach from businessmen to the public at large – financially incentivising the use of bio-diesel and smart-cars, while de-incentivising the purchase of petrol-guzzling four by fours, are just two measures the government could take. We could balance out the rise in fuel duty with a land tax on the wealthiest, with the proceeds going to green infrastructure, as Caroline Lucas the Green MP recently suggested.

But the current government has fallen into the hole of inaction and has carried on digging. Osborne overlooks significant investment in long-term green infrastructure, as well as the jobs that would come with this, in favour of non-renewable, imported gas from Norway. Last week he announced the creation of the New Office for Unconventional Gas, kicking off a period of consultation on shale gas extraction and importation. After Wednesday’s Autumn statement, Mr Osborne cannot even claim that his failure to invest in green infrastructure is because there’s no money in the pot. On the contrary, Gaby Hinsliff of the Guardian tweeted this week that, ‘the anti-fuel tax lobby now must go down as one of most successful campaigns in modern politics. & most expensive, to public purse’. An extra £5bn is to be invested in roads. We’re going to see upgrades to the A1 in the north-east and new dual carriageways in East Anglia, instead of the new railways and public transport links that these regions in particular so desperately need.

And talking of controlling minimum prices, what about public transport? People will never choose buses over cars while fares rise in a way completely inconsistent with the quality of the service – the cost of a bus ticket into town more than tripled while I was at school in Bristol, despite several of the local routes being cut in that time. We must push people away from cars and over-consumption of petrol, but to do that we have to have feasible alternatives to push them towards. Let’s invest in public transport and expand provision for cyclists in cities. A new report by the public advisory body, the National Institute for Health and Clinical Excellence, says cycling and walking should become the norm for trips of under 20 minutes or under – we need to realise this target.

Petrol is the opiate of the masses and the rulers in equal measure. We need a government that recognises the legitimacy and necessity of increasing the cost of fuel as part of a broader cultural move away from dependency on non-renewable fuel and cars. By not postponing, but cancelling, the fuel duty rise, at the same time as failing to fulfil the promise for the ‘greenest ever government’, this administration is washing its hands of the whole petrol dependency issue.

Welcome to Oxford – Freshers week fashion (for her) 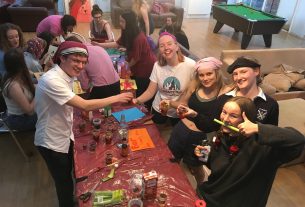