The charity evaluator organization “Giving What We Can”, established by Dr Toby Ord of the Oxford Philosophy Faculty, has every reason to pop the corks for its third birthday: 269 members and $101.7 million in pledges have been raised since its foundation in Oxford in 2009.

In December 2009 the Oxford-based moral philosopher founded “Giving What We Can” (GWWC). Its aim is to identify and recommend those charities providing most cost-effective poverty relief and to encourage people to make a pledge of at least 10 percent of their lifetime earnings to these charities.

“When I found out just how much I could help people in developing countries with my money compared to what it could buy for myself (50,000 years of life versus a larger house etc),” said Ord, “I decided I would make a pledge to donate a large part of my income for the rest of my career.”

The current level of pledges can save four million years of healthy life, according to Dr Ord. This is an impressive number, but the team hopes “that one day the idea of donating 10% of one’s income to effective charities will become the norm, not an exception.”

According to the GWWC “pledge calculator”, a 10% annual donation by someone who is currently 20 years old, expects to retire at the age of 65, and will earn £31,000 per year on average for the rest of their career, could provide 3,982 years of healthy life and 73,005 years of school attendance for those in the most need.

The message is clear: someone earning the British average income can make a big difference. Donors come from a variety of backgrounds; students, academics, artists and business people from 17 countries are among the members.

GWWC considers global health as the most effective area of intervention and recommends the charities Against Malaria Foundation, Schistosomiasis Control Initiative and Deworm the World.

Will Crouch, a DPhil student at Oxford and Vice President of GWWC, commented: “I always wanted to make a difference to global poverty, but didn’t know how. When I heard the ideas behind Giving What We Can, I knew it was the right approach.”

Instead of looking directly at charities and evaluating their effectiveness, GWWC does it the opposite way, through a “top down” approach. First the team identifies causes and areas where aid is needed, such as health, education or environment. The next step is to search for the most promising sub-causes, such as malaria treatment, and identify interventions to tackle them. Only then are the actual charities in this field examined and evaluated.

“Some charities are 100 times more effective than others.” How does the research team of GWWC arrive at such evaluations? Other charity evaluators, such as Charity Navigator, focus primarily on the charity’s overhead costs, i.e. their expenses on advertisement, salaries and general administration. On the basis of this approach, they recommend those charities spending the majority of their donations directly to their programs.

GWWC calls this “one of the most prevalent and dangerous” approaches to charity evaluation, as money invested in administration is in fact money spent on the program. Expenses on administration can be just as beneficial if they improve the program itself.

So far Giving What We Can has 10 chapters across the US, England, Australia and one branch in Zurich, but the organization wants to expand to other parts of the UK, Spain and Brazil. 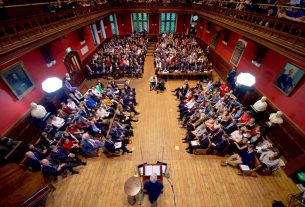