Our pseudonymous bluestocking sexplorers muse upon their days of innocence.

Do you remember discovering your clitoris? (Or whatever you have that performs a similar function, we guess) Aggie and Edna reckon they had about five to ten years of pre-lapsarian nights of working themselves through the sheets before the implications of what was between their legs began to dawn on them (by which time Aggie, who shared a bedroom, must have had literally thousands of wanks within about five feet of her brother).

Edna found out about s – e – x when she was five, a year before her parents had intended. Her six year old sister had been let in on the secret via a quiet two hours with her parents, aided by a large leather bound red book, about babies and what happens when a mummy and daddy love each other very much. Sister promptly scuttled off to tell Edna the exciting news and practise  out the moves on unsuspecting Edna. Anxious parents discovered a pile of neatly folded clothes on the stairs which led them, Hansel and Gretel style to their copulating children. At which point the girls were separated, mummy got a bit upset, then mummy  and daddy decided to explain to Edna, a year too  early but can’t be helped, what the fuck her sister had been trying to do to her. Aggie, on being told that she was to have a younger brother and how that situation arisen, claimed that she already knew about sex because daddy had got her pregnant too.

As we went through the awkward adolescent years, however, we drifted away from the good clean fun of childhood sexuality and became more self-conscious. Both of us spent much of our mid-adolescences in ‘relationships’ with boys we weren’t particularly interested in (Edna still has nightmares in which she tries to evade the clammy hands and misplaced chin-kisses of a certain R_____ P____) because our friends thought they were cool, (and later in order to disguise the fact that we getting it on with their friends’ girlfriends). Edna’s first kiss took place in Kings, , the local disco, where, wearing her fake gel bra and beating her breasts she managed to ensnare K____, local heart throb and gained the accolade of 11th girl on his list of conquests that night. Basically it was a disaster and much more to do with social point scoring than actually fancying the tongue in question.

Fortunately, by the time either Edna or Aggie got round to losing our virginities, the people we chose had less to do with our desire to seem cool (we’d moved on to expressing this desire through battling to see who could drink the most cider without being sick in our friends’ parents’ bath tub), and had gone back to being about the desperate, dripping need between our legs.  Edna lost her virginity to a large cocked male in the back of a van. In fact, no cock has subsequently been as large or fulsome. Edna made the unfortunate decision of telling large cocked male that it was her first time, mid fuck,  which led to a brief interlude in which he asked ‘shouldn’t the first time be with someone you love’ before confessing that his first time was age 15 in a car park with a relative stranger. Sex then recommenced. Aggie’s loss of maidenhood was similarly confusing, as she for some time believed she had lost her virginity to a tampon, after being misinformed by a trouble making Macedonian.

But really, none of these experiences scarred us. We’ve both learned that your sex life shouldn’t be about what will make you look cool: don’t let your social scene dictate your orientation, and if you don’t want to have sex, you damn well shouldn’t let a sex column make you feel bad about it. In the words of the now neglected noughties soft rock band Sloan – ‘If It Feels Good Do It’. Let’s all try and get back to the childlike glee with which we approached sex when we thought that we were discovering it for ourselves, before we realised it was a well established, kind of a big-deal, thing. That said, once you do understand the ways of the world, the sibling thing quickly ceases to be cute. Words of advice. 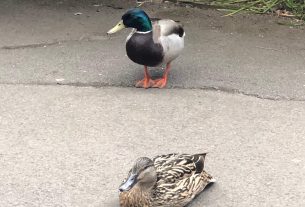 What the duck? How Balliol’s college ducks waddled into our hearts